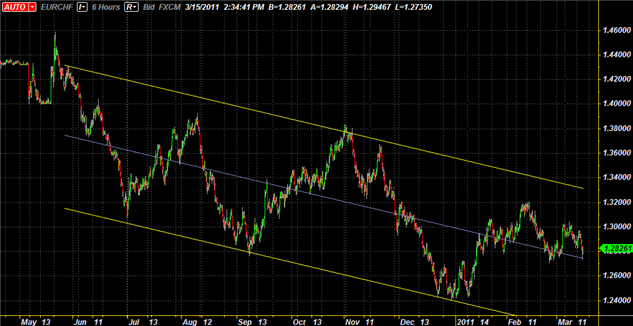 Seen as a risk-on, risk-off pair gauge for Europe over the past few months, I noted last month that “the EUR/CHF has appeared to have completed its most recent advance”; accordingly, the pair has declined as expected. While the depreciation at the end of 2010 was credited to an increase in sovereign debt concerns, the most recent sell off over the past few weeks can be marked by the market’s shift to risk-aversion due to the crisis in North Africa and the Middle East. Moreover, the recent crisis in Japan has pushed investors to sell-off risky assets; the Swiss Franc has been a beneficiary given its perception as a safe haven asset. Accordingly, after failing to climb through significant technical resistance over the past few days, and with sovereign debt concerns beginning to rise to the foreground again, the EUR/CHF pair appears poised to continue its decline in its descending channel over the next days.

Trading Tip – The EUR/CHF pair has been swing trading in a clear descending channel over the past ten months, carving out a near-1800-pip range over said time frame. Now the pair is sitting just above its channel regression, while testing to break its 20-SMA and 50-SMA. As such, a break below these levels exposes significant downside. The EUR/CHF pair could fall back towards its February low unabated, and coupled with significant fundamental risk, an even steeper fall towards its yearly low. With momentum to the downside, as evidenced by a declining RSI on the daily chart, as well as a Slow Stochastic oscillator that has issued a sell signal with the %K below the %D at 50 and 58, respectively, further evidence for our bearish bias exists.

Event Risk for the Euro-zone and Switzerland

Both the Euro-zone and Switzerland have a fair amount of data due the remainder of the week, though only a few significant events remain on the docket. However, given the high volume of lower importance events, some short-term volatility could be sparked, especially on Thursday and Friday, when markets are typically thinner. Nonetheless, the main focus will be on the sovereign debt restructuring negotiation and the clean-up effort in Japan.

Euro-zone – Further readings of Europe’s largest economy remain the most significant data left for the Euro-zone this week, with German producer prices due Friday. However, before then, CPI figures for the broader Euro-zone are due, and traders will certainly pay attention to these data as the European Central Bank has signaled that it is prepared to tighten its monetary policy on rising price pressures.

Switzerland – Although Swiss industrial production data for the fourth quarter is due on Thursday, it will be trumped by the quarterly rate decision meeting of the Swiss National Bank. An sentiment shift in SNB policymakers’ rhetoric would not come as a surprise; as price pressures rise, the SNB has been unable to artificially suppress the value of their currency in light of the prospect of creating a swiftly-accelerating inflationary environment. As such, given the recent shift in allocating risk since the last policy meeting – the markets have accepted the Franc as a proxy to risk aversion – the SNB might have a different outlook of the recovery.