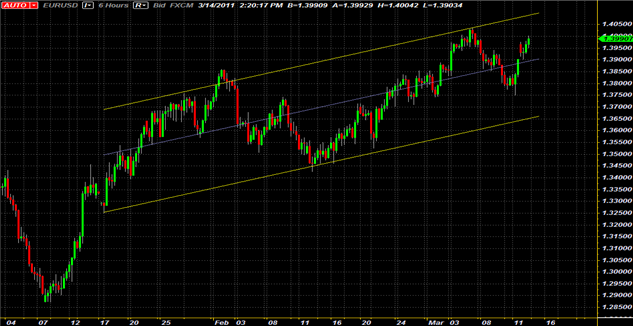 After declining for the better part of the last two months of 2010, 2011 has remained quite beneficial for the Euro, as it has appreciated 4.6 percent against the U.S. Dollar; in fact, the Euro has gained against every currency, particularly the Pacific Rim currencies. Nonetheless, after February’s slight correction, the EUR/USD pair appears to be finishing its most recent leg up in the ascending channel, should it be unable to break the psychologically significant 1.4000 area. Now, with the EUR/USD pair sitting in the middle of its ascending channel dating back to mid-January, there appears to be significant room for the EUR/USD pair to swing lower as part of its corrective wave, giving traders an opportunity to collect profits.

Trading Tip – The EUR/USD pair has been swing trading in a clear ascending channel over the past ten weeks, carving out a near-700-pip range over said time frame. Now that the pair is sitting just above its 76.4 Fibo retracement on the November 4 to January 9 move, as well as above its 20-SMA, 50-SMA, and 100-SMA, there is potential downside: the EUR/USD pair could fall if it fails to break through the psychologically significant 1.4000 level and close above its yearly high at 1.4035. With momentum to the upside, the pair would need to fall below its 76.4 Fibo with consecutive closes below that area on the six hour chart for the trade to kick in.

Event Risk for the Euro-zone and the U.S.

Both the Euro-zone and the U.S. have significant data due this week, though traders should look at two events for a EUR/USD pair trade. The summit for the package of a Euro-zone debt restructuring is wrapping up, and given the parameters of the deal (followed by Euro-bullish commentary by ECB policy makers), fundamental momentum is clearly in favor of Euro-based pairs. Nonetheless, a shift in rhetoric following tomorrow’s FOMC rate decision could boost the Dollar.

Euro-zone – Conditions of Europe’s largest economy will be revealed tomorrow as per the release of the ZEW Survey, as well as forecasts of the current sentiment. Similarly, the ZEW Survey for the Euro-zone on the whole will be released as well. Recent rate hike rhetoric set forth by European Central Bank policymakers is likely to have boosted the sentiment readings.

U.S. – While the result of the FOMC rate decision tomorrow will surprise no one – the Overnight Index Swaps shows that markets believe there is a zero percent chance of a 25-bps hike – markets will look towards the commentary to determine whether or not it is reasonable to expect the Federal Reserve to wind down ‘QE-2’ in June. Popular opinion is turning hawkish as inflationary pressures begin to mount. Also, a reading of the health of the housing market is due, with housing starts data from February expected to show further increase, albeit at a slower pace than in January.