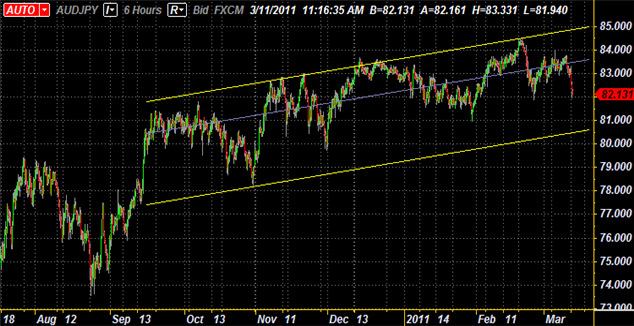 Following an extremely volatile month in January, in which the pair trade in a tight descending channel, the first three weeks of February were marked by definitive Aussie gains. Since then, the direction of the pair has been uncertain, with the AUD/JPY pair having flirted with the 84.000 area as well as the 82.000 area in the past three weeks. While the earthquake in Japan certainly helped Yen-crosses across the board – the AUD/JPY pair was no exception – the trend dating back to early September is definitively of AUD/JPY pair strength, having appreciated from as low as 78.000. Now, with the AUD/JPY pair facing extreme technical sentiment after completing another leg down in its channel, a swing trading opportunity has emerged for traders to collect profits.

Trading Tip – The AUD/JPY pair bounced off of a rising trendline at 81.912 earlier in today’s session, coinciding with the 38.2 Fibo on the September 15 to February 18 move. The pair previously failed to break this level on February 24, and has not closed below this level in the past six weeks. Accordingly, our bias remains to the upside. Although the Slow Stochastic oscillator has issued a sell signal on the daily chart, given the trend and failure to close below the 38.2 Fibo, I believe this is a false signal; rather, on the 6-hour chart, the RSI is coming off of oversold levels, and the MACD Histogram has appeared to have reached its most extreme bearish divergence. A break above 82.850, the 50-SMA, and a subsequent close above the 23.6 Fibo at 82.873 confirms our bullish bias, and the momentum could carry the pair towards its Range Top.

Event Risk for Australia and Japan

Following the 8.9-magnitude earthquake that struck only a few hundred miles from Tokyo, Japan, Yen-based crosses gained across the board. Specifically, the AUD/JPY pair fell nearly 100-pips in the ensuing hours, a significant move considering the pair has been entrenched in a few hundred pip range for the past few weeks. In terms of scheduled data releases,

Australia – Australian economic data is light over the next week, with no significant economic data due. Accordingly, strength by commodities, or uplifting data from China, could be the catalyst to drive Aussie-based pairs higher.

Japan – Japan faces a heavy stream of data in the following days, but the most important data is scheduled to be released in the early part of the week. The data could be ignored, as efforts are likely to be concentrated on recovering after the earthquake. If what happened to the Kiwi following the earthquake in Christchurch, New Zealand is an indication of what could happen to an affected currency, the Yen could see further declines in the ensuing days regardless of economic data that is released. Rumors have floated that the Bank of Japan will delay its policy meeting in the coming week, though it is certain that an accommodative monetary policy will continue to ensure the economy does not suffer following the natural disaster.