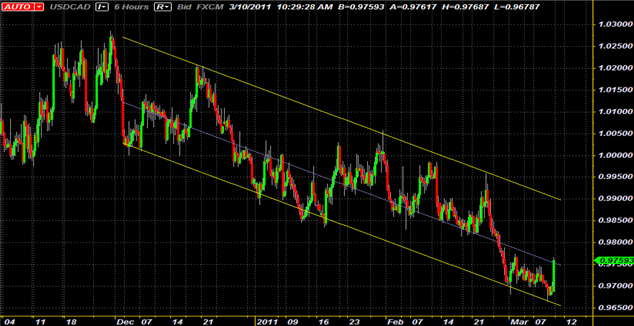 The USD/CAD pair has been holding below parity for the past few weeks as the recovery finds footing in the world’s most advanced economies. After failing to break through the psychologically significant 0.9700 level during the last week of February and the first week of March, the pair jumped above 0.9750 as crude oil futures and equity markets plummeted.Accordingly, today’s decline in the U.S. equity markets came as no surprise given the USD/CAD pair’s correlation with stocks; the Canadian Dollar spot has a -0.732 correlation with the S&P 500. As investors remain cautious about investing in risky assets on fear of contagion spreading throughout the Arab world, the USD/CAD pair remains a strong proxy for trading market sentiment as indicated by moves in U.S. equity markets. Now, with the USD/CAD pair sitting in the middle of its descending channel, a swing trading opportunity has emerged for traders.

Trading Tip The descending channel has been firmly in place since mid-November, but the bearish trend began in August after the Federal Reserve announced it would inject liquidity into capital markets via quantitative easing. As noted on the 6-hour chart above, when the USD/CAD pair has touched the range bottom of its descending channel, it has rebounded; most recently, this occurred at the beginning of March when it touched the 0.9700 level. This occurred again yesterday, and today the pair found itself bouncing over 50-pips higher off of the range bottom. Considering the USD/CAD pair has been unable to close below the psychologically significant 0.9700 level, our bias remains to the upside in the very near-term, and our short entry will come after further appreciations. The MACD Histogram is tailing off of its bearish divergence. With a rising RSI of 43, and a Slow Stochastic indicator that suggests a buy signal, the pair could easily push through its 20-SMA and test the 50-SMA before declining once more. Keep in mind, our most recent USD/CAD pair SSI reading is bearish, and our fundamental forecast for the Loonie is bullish.

With a high volume of data due tomorrow, particularly significant data, there should be higher volatility for the USD/CAD pair. The Canadian labor market is expected to show further improvement, while data out of the U.S. is expected to give insight on whether or not consumption is continuing to improve. Consumption is the most important component of growth in the U.S., as it represents nearly 70 percent of the gross domestic product figure.

U.S. – Advanced retail sales data, typically a significant market-moving release, are due at 13:30 GMT. Sales were expected to have increased by 0.9 percent, a sign that the consumption is increasing, and growth should be boosted in the coming months. Accordingly, retail sales less autos for February were also expected to have increased in February. Further signs of consumption and thus a stronger recovery will likely force the Federal Reserve to reexamine it asset purchase program in the coming weeks and months. After equity markets open, the U. of Michigan confidence gauge for March will be released, another significant report.

Canada – The Canadian economy continues to be among the fastest to recover following the recession, with the most recent reading of the labor market showing that all jobs lost during the recession have been recovered. Accordingly, any jobs added in February as evidenced by the net change in employment report will show that the unemployment is moving back towards its natural rate, leading to further Loonie strength.