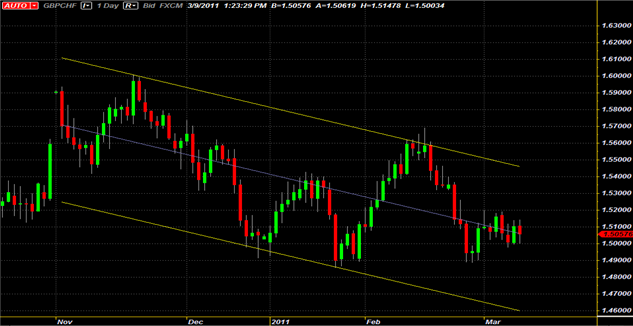 The GBP/CHF pair has been steadily depreciating since June 2009, and this trend followed through late in 2010. However, in the months straddling the new year, the pair began to appreciate, jumping nearly 1000-pips in the first two weeks of January. In February, the pair touched as high as 1.5700 before hitting a low near 1.4900. It was noted last week that a smaller, ascending sub-channel had emerged over the past three-months, and while the pair did appreciate, it was unable to breakthrough significant Fibonacci resistance expressed in longer-term trends. With the short-term technical indicators tailing off Pound-favor, the GBP/CHF pair has been unable to follow through on its double-bottom pattern. Given the muted growth of the British economy, unless stated otherwise by the Bank of England, Pound strength since the low near 1.4900 at the end of February could be halted amid another rate decision in which no statement is offered, further frustrating speculators betting on a rate hike; it is worth noting that at the last meeting, however, a third member did in fact vote for a rate hike. Now, with the pair stuck along its channel’s regression, a swing trading opportunity has emerged ahead of the Bank of England’s Monetary Policy Committee meeting.

Trading Tip – After rebounding off of 1.4900, the GBP/CHF pair failed to break through its 50.0 Fibo (the November 18 to December 30 move at 1.5209) on two separate occasions – March 1 and March 3 – the pair has been wedged below the 50.0 Fibo and above the 38.2 Fibo at 1.5019. Accordingly, the 38.2 Fibo represents the descending channel’s regression. A break below the 38.2 Fibo exposes 1.4900, a significant level of psychological resistance which the pair was unable to break on three distinct attempts this year so far. Should the pair break this, the next target is the 23.6 Fibo, and then the yearly low set on the first trading day of 2011. With the Slow Stochastic oscillator on the 6-hour chart having recently issued a sell signal, as well as the MACD Histogram differential tailing off of its bullish divergence, our bias remains to the downside ahead of tomorrow’s Bank of England rate decision.

Event Risk for the U.K. and Switzerland

While there is no data due for Switzerland, Pound-based pairs should see a spike in volatility after the Bank of England rate decision. While the key overnight interest rate is expected to remain on hold, markets will be looking for the commentary after the meeting on the central bank’s inflation expectations. Later in the week, the sentiment expressed will be confirmed or refuted as producer prices are due on Friday.

U.K. – More significant data is expected out of Britain the remainder of the week, with the Bank of England rate decision expected tomorrow at 12:00 GMT. While rates are forecasted to remain on hold, the markets will be looking at the commentary provided by the Monetary Policy Committee; the Overnight Index Swaps is showing that 86-bps have been priced in for the next 12-months, though traders are net short the Pound, according to the SSI.

Switzerland – With no significant fundamental data due for the remainder of the week, there is little event risk posed across Franc-crosses. However, next week, volatility could spike for Franc-based pairs as the Swiss National Bank has their quarterly monetary policy meeting, in which significant changes from the fourth quarter’s policy stance could be exhibited.