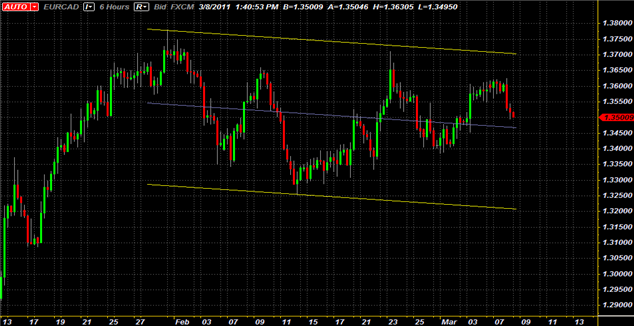 The EUR/CAD pair headed into February with a full head of steam, and after gaining approximately 900-pips in January on Euro-zone optimism, few were willing to stand in the way of Euro-crosses’ strength. The rally stopped abruptly, however, on exaggerated overbought conditions, triggered by renewed fears of solvency problems for Euro-zone countries. More recently – as of last week, in fact – the EUR/CAD pair found itself approaching similar overbought conditions it had faced at the start of last, a sign that a sharp correction lower could occur for Euro-based pairs. Now, after failing to break through a significant Fibonacci level, the EUR/CAD pair is set to head lower into its slight descending channel that it has carved out since late January, creating a swing trading opportunity for traders to collect profits.

Trading Tip – The EUR/CAD has been adhering to its Fibo retracements levels and significant moving averages since late January. With little optimistic data due for the Euro-zone over the next few days, we find that the pair is unlikely to break out of its range. Upon failing to close above the 61.8 Fibo on the January 31 to February 14 move, the EUR/CAD pair is poised to break below its channel’s regression and head lower within its descending channel. Our confirmation of downside momentum would be a close below the 20-SMA. Accordingly, a declining RSI on the 6-hour chart indicates that the pair will likely fall further before starting its next leg up in the channel. Similarly, the MACD Histogram on the 6-hour chart has recently flipped to a bearish divergence, with the differential widening, while the Slow Stochastic oscillator is trending lower, with the %K lower than the %D at 56 and 72, respectively.

Event Risk for the Euro-zone and Canada

The economic docket is packed this week for all majors, although the data remains slightly thinner for the Euro-zone and Canada in terms of significant data. While a heavy volume of less significant data could provide a boost to short-term volatility, forecasts indicate that the data released for each country will be Euro-bearish and Loonie-bullish.

Euro-zone – Key data out of Germany will give markets an insight into the engine of European growth. German industrial production is expected to grow further, though the forecast could be higher than the actual given the recent appreciation of the Euro against the Swiss Franc and U.S. Dollar. The most important piece of information over the next few days is the European Central Bank Monthly Report for March, which the markets will pay particular attention to considering the aggressive hawkish rhetoric employed by ECB President Jean-Claude Trichet during last week’s commentary period following the ECB rate decision.

Canada – Canada too has important data coming out this week, though it is not until Friday when it will hit the newswires. The Bank of Canada eased off interest rate hike expectations recently, though a continued recovery of the Canadian labor market as evidenced by Friday’s news release could renew such talks among BoC policymakers, providing further momentum for the EUR/CAD pair to head south.