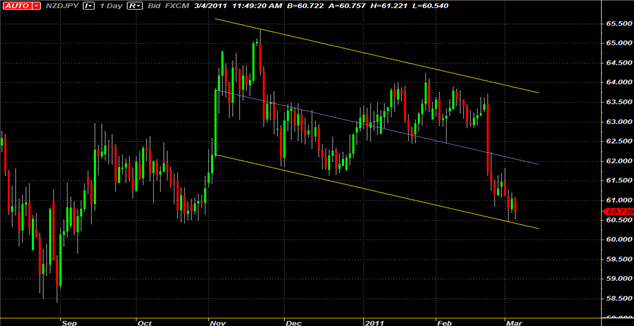 While the NZD/JPY pair has been in a steady decline since early November, the most recent leg down in the channel was the result of an unforeseen fundamental shock – the earthquake in Christchurch, New Zealand. That being said, the pair was forming a pennant in the early part of 2011, and the natural disaster proved to be trigger to send the pair lower. It should be noted that before the event, however, the pair was in a steady appreciation as the markets rediscovered their desire for risk. With the global recovery appearing to have found some firm ground, a return to risk may be on the horizon in the coming weeks and months. With the pair at the bottom of its descending channel, there appears to be an opportunity for traders to collect profits by swing trading the NZD/JPY pair.

Trading Tip – The NZD/JPY pair headed into late February in a pennant formation, but ultimately broke lower on significant even risk. Now, with the pair at the bottom of a descending channel that is on the verge of break, there is an opportunity to catch the swing trade if the NZD/JPY pair can gain up to its 23.6 Fibo (on the May 3 to August 30 move). Accordingly, if the pair is able to make the reversal north, it could gain steam headed back towards the range top at 63.752. The technical indicators agree: the daily RSI is oversold at 27, and the MACD Histogram has tapered off of its bearish peak and is moving towards a bullish divergence. The Slow Stochastic oscillator, however, remains trending lower; when it begins to turn towards a buy signal the long position will likely be entered.

New Zealand and Japan both have a fair amount of data due out next week, although much of it is not expected to be market moving. With that said, arguably the most important data release out of the Asia session comes the Reserve Bank of Australia rate decision, in which the central bank is expected to lower interest rates. Despite this, forecasted deteriorating economic conditions in Japan will likely prevent the NZD/JPY pair from breaking lower unless commentary after the rate decision is particularly bearish from the RBNZ.

New Zealand – New Zealand has significantly less data due next week than most of the majors, and much of the data due early in the week is fairly insignificant. Nonetheless, the Pacific Rim nation has one of the most important events of the week of any major: a rate decision on Wednesday. New Zealand remains the only country with rate decreases priced in over the next 12-months; according to the Overnight Index Swaps, 15-bps are expected to be cut. To this end, the median expectation for the RBNZ interest rate on Wednesday is down to 2.88 percent, accordingly to a Bloomberg News survey.

Japan – While Japan has many data releases expected next week, not many of them are significant enough to be market moving. However, there are three due between Monday and Wednesday that are of enough importance to take heed to: the Leading Index, a measure that precedes larger developments in the rest of the Japanese economy, is due on Monday, as well as Trade Balance data; and on Wednesday, gross domestic product figures will be released, which are expected to show that Japan remains mired in a recession.