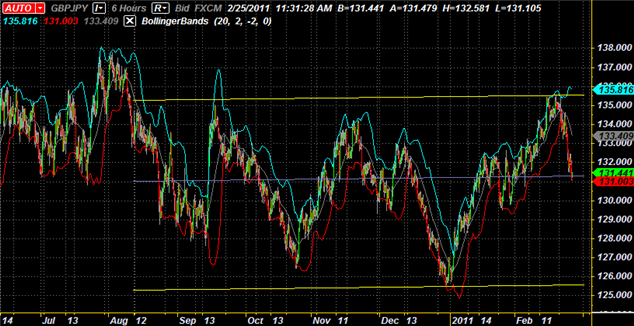 The GBP/JPY pair has been trading in a choppy sideways channel for the better part of six months, carving out a nearly 1000-pip channel since August. After moving in what appeared to be a descending triangle since May, the GBP/JPY pair broke out to the upside, topping off just above 135.00, its highest level since mid-August. Now, with the broader markets moving towards a risk-off period once again on the heels of political instability in the Middle East, the Yen has once again gained favor for its safe haven status and appreciated against the majors (save the Swiss Franc, another safe haven currency) since the beginning of the turmoil. Going forward, with the GBP/JPY pair trading beneath its significant moving averages, while testing a key Fibonacci resistance level, there is room for swing traders to collect profits as the GBP/JPY pair remains within its six-month long sideways channel.

Trading Tip – The GBP/JPY pair has seen wide swings over the past six months, trading mostly sideways though the bias has been to the upside as the pair remains 500-pips above where it started the year, even after falling back 400-pips over the past 10 days. In fact, with an ATR of 130, there is significant room for traders to collect profits on the daily swings. The GBP/JPY pair is now in its leg-down from the range top, but is finding resistance at its channel regression; accordingly, while we expect the pair to continue to decline within the channel over the next few weeks and months, in the near-term, a rebound is expected as the SSI indicator is bullish, despite pulling back from recent extremes. On the 6-hour chart, the GBP/JPY pair is coming off of oversold levels on the RSI; the MACD Histogram differential is narrowing off of a bearish divergence, suggesting bullish momentum; and the Slow Stochastic oscillator is close to issuing a buy signal, with the %K equal to the %D.

Event Risk for the U.K. and Japan

Both the U.K. and Japan have market moving data coming out next week, though it will all be released at the beginning of the week. The data comes in two waves, so to speak: on Sunday and Monday, figures regarding retail trade and unemployment will be released for Japan, while on Tuesday a slew of British economic data regarding the housing sector and consumer credit will be revealed.

U.K. – The docket is empty until Tuesday for Britain, and although what is considered to be the most market moving data will not be released next week, enough significant data will be that could weigh on Pound-crosses. The housing sector is expected to show a continued decline in prices in February, as mortgage approvals are expected to have fallen in the trailing months. Furthermore, consumer credit and money supply data will be released, important figures considering the recent easing of expectations for a rate hike by the Bank of England.

Japan – Significant data releases for Japan are front-loaded next week, with all of the potentially market moving data coming out Sunday and Monday. Retail trade data, a measure of consumer spending, is due first, followed by household spending data and the unemployment rate on Monday.