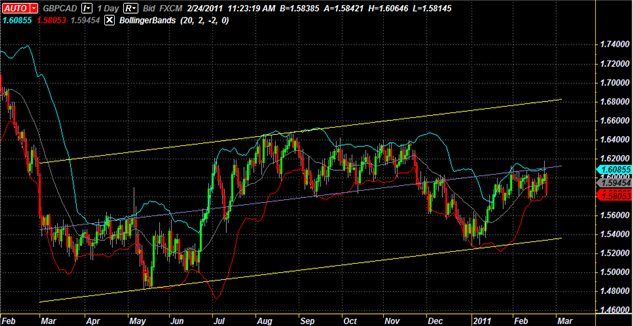 After dropping nearly 1000-pips from late November through the end of December, the GBP/CAD pair went parabolic, recouping nearly 80 percent of its losses in January alone. The pair has since tailed off, falling back below 1.5900 in the month of February after range trading between 1.5800 and 1.6100 for most of the current month. The recent consolidation and sharp decline towards 1.5800 has created severe oversold conditions, which suggest that the GBP/CAD could be poised for a rally. Accordingly, with the GBP/CAD pair sitting just below its range regression and holding above significant resistance, bias remains to the upside with significant room for swing traders to collect profits as the GBP/CAD pair moves upward in its 12-month long ascending channel.

Trading Tip – After dropping nearly 300-pips over the past 24-hours, a sharp correction considering it took the GBP/CAD pair a week to appreciate those 300-pips, it appears the pair is ready to resume its steady appreciation. Such a move would not be unprecedented; after each of the sharp depreciations the GBP/CAD pair has experienced over the past month, steady appreciations of 200- to 300-pips occurred in the ensuing week. As such, looking at the 120-minute chart, with an RSI below 30, an MACD Histogram that has begun to tail off of its bearish divergence, and Slow Stochastic indicators that have issued a buy signal, our bias remains to the upside in the short- to mid-term for the GBP/CAD pair.

Event Risk for Australia and Canada

While the calendar is empty tomorrow for Canada, the significant gross domestic product figure for the 4Q will be released for the U.K., as well as its components. Early next week, though, presents a period of significant event risk for both the Pound and the Loonie. On Monday, Canadian GDP data will be released. On Tuesday, both countries have a fair amount of data on the docket: early in the day, British housing data as well as consumer credit and money supply data will be released, followed by a rate decision out of Canada.

U.K. – Tomorrow could be a particularly volatile day for Pound-based pairs, with significant market moving data expected to cross the newswires early in the European session. Gross domestic product figures for the 4Q are anticipated to show a further contraction of the British economy, as stagflation appears to be setting in. Data concerning the components of the GDP figure will be released as well.

Canada – No significant data is on the docket for the remainder of the week for Canada, though significant event risk could come to fruition on Monday, as 4Q GDP data is released, followed by a Bank of Canada rate decision on Tuesday, in which interest rates are expected to hold. The commentary following the rate decision will be crucial, as the markets are pricing in a 30 bps increase in the key interest rate over the next three months.