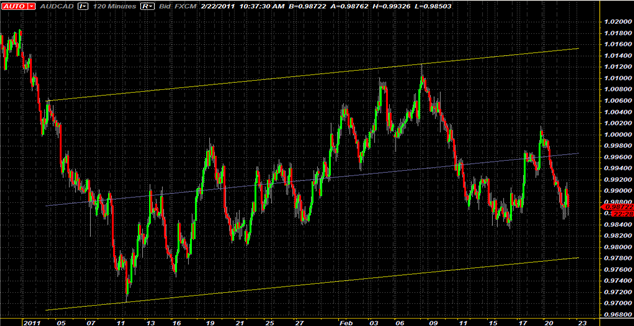 The AUD/CAD pair has been entrenched in a sideways channel since September, and 2011 has provided no reprise from this long-term trend. While the pair has traded near parity for much of the past seven weeks, a newer, ascending sub-channel has emerged within this long-term sideways trend. During this time, the AUD/CAD pair has traded as high as 1.0109 and as low as 0.9702. Going forward, we expect that the AUD/CAD pair will remain within its 400-pip channel, though current bias points towards the upside, providing traders an opportunity to collect profit on the swing trade.

Trading Tip – After peaking at 1.0016 on Friday, the AUD/CAD pair hit strong resistance at the 61.80 Fibo at 1.0003 on the January 3 to January 12 move. In the two days since, the pair has fallen 120-pips, dropping below its 50-SMA and 100-SMA along the way. Now, with the pair having trouble breaking through its 38.2 Fibo support, and recently coming off of oversold conditions, the AUD/CAD pair appears poised to rally within the ascending channel it has carved out in 2011. With the MACD Histogram tailing off of its bearish divergence, coupled with the Slow Stochastic oscillator issuing a buy signal (the %K is at 28, while the %D is at 22), our bias remains to the upside for the remainder of the week, barring significant event risk.

Event Risk for Australia and Canada

The calendar for Australia and Canada remains light for the rest of the week, after the significant Canadian Retail Sales figures were released today. The next most significant event comes out of Australia on Wednesday. Accordingly, with little market moving data expected over the next few days, there is little event risk that would cause the AUD/CAD pair to breakout from its current channels – the more recent ascending channel, dating back to the start of 2011, and the longer-term sideways channel that dates back to September.

Australia – While there is a steady flow of Australian data through Thursday, only one significant data release sits on the docket. On Wednesday, the Conference Board’s Leading Index will be released, a composite used to forecast short- to mid-term growth for the Australian economy. The index has increased the past few months, though it is a trailing indicator: the information revealed during the release is already known to the market. Nonetheless, further gains by the index will provide fuel for further Aussie gains.

Canada – With Retail Sales being released today, the docket remains light for Canadian economic news for the remainder of the week. The Teranet/National Bank HPI for December is due on Wednesday, though it is not a significant market moving event. Accordingly, any further AUD/CAD weakness will need to find origins elsewhere.