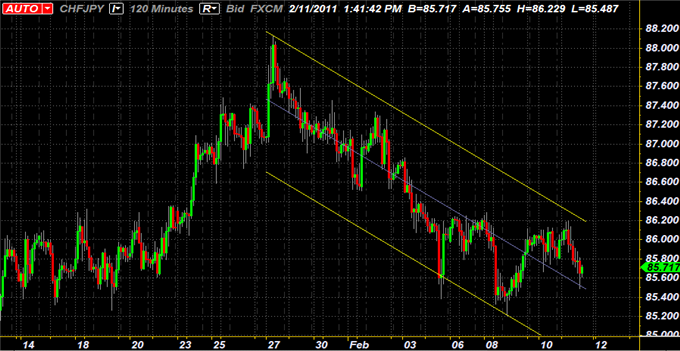 While the CHF/JPY traded almost as high as 91.000 and almost as low as 76.000 in 2010, 2011 has painted a different picture thus far. For the first six weeks of the year, the CHF/JPY pair has been in a much 350-pip band, whereas over the same timeframe last year the pair had moved in a 600-pip range. With both currencies now widely considered to be safe haven bets – the Yen against the U.S. Dollar, and the Franc against the Euro – fiscal turmoil in both the United States and Europe has kept the pair range bound. Over the past two weeks, however, the pair has been depreciating steadily, falling 2.25 percent since January 27. Since January 27, the CHF/JPY pair has been in a descending channel, and with little event risk on the horizon for either country, the CHF/JPY pair looks to remain range bound in the near-term.

Trading Tip – The CHF/JPY pair continues downward in its descending channel. As such, the lows will be lower, while the highs will be lower. Accordingly, stops need to be set in a tighter range than normally as bearish momentum remains. With the bias still to the downside, the long-term play is to short the CHF/JPY pair; however, after steadily declining over the past few hours, one could expect a slight retracement to the upside. Thus, going long the CHF/JPY pair to the previous session’s close would represent a potential top, at such time a short would be in order. After the retracement, it is expected that the CHF/JPY will try and test its 100-SMA at 85.256.

Event Risk for Switzerland and Japan

While the calendar looks empty for Switzerland for much of the week, Japan has significant data coming out early in the week that could potential cause the CHF/JPY pair to break upwards out of its range. Accordingly, with significant Euro-zone data on the docket, poor readings could result in investors fleeing to the Franc as a safe haven against the Euro; this represents an indirect form of even risk to the CHF/JPY pair.

Switzerland – Switzerland has very little event risk for much of next week, making this a candidate to adhere to its current technical bias. Franc strength, however, could come in the middle of the week as Euro-zone GDP data for the 4Q is expected; a reading that highlights deteriorating conditions could cause investors to flee to the Franc for safe haven.

Japan –For Japan, no data is due until Sunday. However, the data Sunday is significant, as preliminary 4Q GDP will be released. With the Japanese economy expected to have contracted further at the end of 2010, a “worse-than-expected” reading could be the catalyst for a break out in the CHF/JPY come Sunday night. On Tuesday, Japanese industrial production data for December will be released, followed by the Bank of Japan rate decision; rates are expected to remain on hold at record lows.