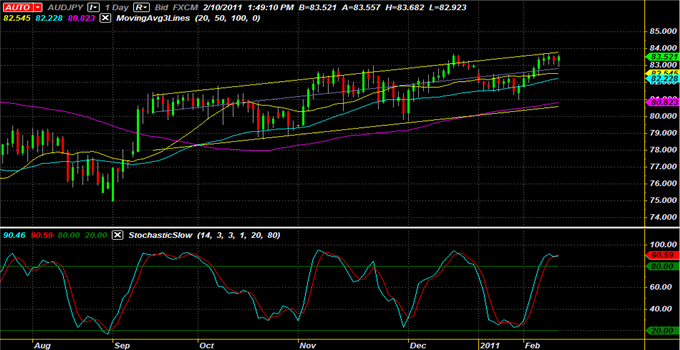 The AUD/JPY pair has been in an ascending channel since mid-September, and movements in recent weeks have given no indication that the pair is ready to breakout from its range. The pair has moved retraced its losses in January despite falling sharply earlier in the week on the news that the People’s Bank of China would be raising rates once more. Nonetheless, with little event risk until early next week for both the Australian Dollar and Japanese Yen, it appears that the pair is poised to remain within its channel for the time being, experiencing higher-highs and higher-lows as it continues its ascent.

Trading Tip – The AUD/JPY has been slowly appreciating over the past few months, with due cause: the carry trade opportunity has only strengthened as rising prices around the globe boost underlying inflationary pressures, while Japan remains in a period of muted economic growth and deflation. With the pair testing its highest levels since mid-December, technical indicators are signaling for a slight retracement before the pair’s continued ascent. On the 1-hour chart, the RSI is reaching overbought levels, currently sitting at 63.8. Furthermore, trading the AUD/JPY on the Slow Stochastic crosses on the daily chart has proven profitable, especially over the past ten weeks. Accordingly, with the %K, at 90.46, moving below the %D, at 90.59, on the daily chart, a strong sell signal is in order. The AUD/JPY is primed to test the area between its 20-SMA and 50-SMA, between 82.545 and 82.228.

Event Risk for Australia and Japan

Australia – The Aussie lost ground overnight on mixed labor market data, which showed that participation increased on the increase in part-time employees. Nonetheless, the AUD/JPY pair as rallied as Australia’s relatively high key interest rate tempts investors looking to hedge against inflation on the carry trade. With no data expected out of Australia until early next week, it appears that there is no significant event risk from Australia until Monday, when housing data is due during the overnight session.

Japan –Similarly, for Japan, no data is due until Sunday. However, the data Sunday is significant, as preliminary 4Q GDP will be released. With the Japanese economy expected to have contracted further at the end of 2010, a “worse-than-expected” reading could be the catalyst for a break out in the AUD/JPY come Sunday night. On Tuesday, Japanese industrial production data for December will be released, followed by the Bank of Japan rate decision; rates are expected to remain on hold at record lows.