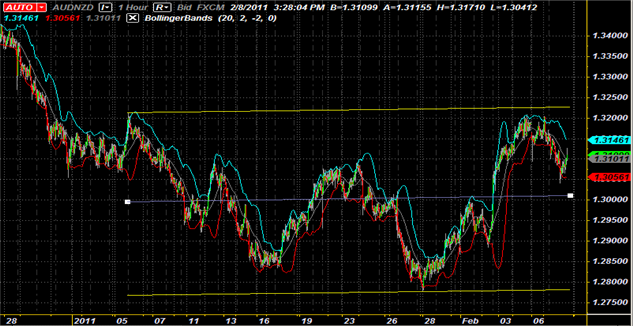 The AUD/NZD pair has been range bound for nearly all of 2011 thus far, stuck in an approximately 400-pip swing between just-north of 1.3200 and just-south of 1.2800. During this time, however, it appeared that the pair might have formed a double bottom, a major reversal pattern, within this sideways channel. Nonetheless, It appears that the reversal may be over as the AUD/NZD pair has faded slightly from the top of its range top. With economic data due over the next few days that could show signs of weakening fundamentals for Australia and news that could spur New Zealand interest rate hawks, the AUD/NZD pair could begin its next leg down towards the bottom of the sideways channel.

Trading Tip – The AUD/NZD pair has been range bound for nearly all of 2011 thus far, and after reaching the top of its channel earlier in the session, it has since fallen once again. The pair bounced off of the 38.2 Fib retracement on the December 23 to January 31 move, only to work its way back towards the 50-SMA. Currently, it trades between its 50-SMA and 100-SMA, at 1.30985. The AUD/NZD currently faces a declining RSI on its daily charts, as well as Slow Stochastic crosses now issuing a sell signal, with the %D at 90.43 and %K at 86.56. However, shorter-term charts – such as the 1-hour and 4-hour – suggest that the pair may rise and test its range top once more before starting to fall.

Australia – The Aussie fell against most majors today on the heels of disappointing business sentiment data, and more news across the wires in the overnight could push traders to sell off the Aussie for a second consecutive day. The Westpac gauge of consumer confidence, which has fallen by more than 5 percent three of the past five months is due, and could weigh on the Australian dollar. Later in the week, labor market conditions will be examined, with estimates showing an increase in the labor force; the unemployment rate is expected to hold, however.

New Zealand –While the first round of data due this evening will likely have an insignificant impact on the Kiwi, later in the overnight session housing sector data is expected across the wires for New Zealand, which could potentially be the fundamental catalyst to cause a sharp depreciation in the AUD/NZD. Housing sales have continued to fall, though the market has improved. Later in the week, a strong jump in by food prices in January could awaken interest rate hawks as inflationary pressures potentially become a concern.