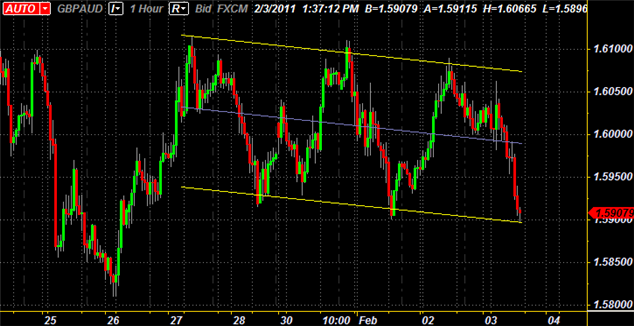 With no clear direction over the past three months – the pair has traded in a 1,200-pip range above 1.6400 and below 1.5200 during this frame – the GBP/AUD has found itself in a well-defined descending channel over the past week. Since January 27, the pair has traded within a 200-pip range, between 1.5900 and 1.6100, much of which has been onset by significant fundamental data: the February 1 move was triggered by commentary by the Reserve Bank of Australia, while today’s move lower for the GBP/AUD was onset by better-than-expected Trade Balance data from Australia. With significant event risk at the beginning of next week, coupled with bullish technical indicators, the GBP/AUD is positioned to test the upper-bounds of its recent channel over the next few days if it is able to maintain support in the 1.5890-1.5925 area.

Trading Tip – The GBP/AUD moved lower today after closing above its 100-SMA yesterday. Since January 27, the pair has traded in a slight descending channel, with no consecutive days of gains or losses. Furthermore, the pair has tested support just below its 20-SMA, at the 23.6 Fib at 1.5890. With the RSI oversold on the 30-minute and 1-hour charts, as well as approaching oversold levels on the 2-hour and 6-hour charts, the GBP/AUD appears poised to rise within the descending channel.

Great Britain – British service business grew in January, according to the PMI-Services released today. Nonetheless, despite the actual data beating economists’ expectations, the Pound saw little relief, falling against most major currencies overnight. Tomorrow, relatively insignificant data on the housing sector is due, but the major data will come early next week that could potential further gains for the Pound. A rebound by the RICS House Price Balance for January could be a significant fundamental trigger on Tuesday.

Australia – The RBA’s decision on Tuesday to maintain its overnight cash target rate at 4.75 percent for the third consecutive month surprised few people in the market. After testing the top of its current channel, the Aussie found renewed strength overnight as the Trade Balance beat expectations, with a surplus of 1,981 million versus 1.600 million expected. Event risk is light until Monday, when Retail Sales for December and the 4th Quarter are due.