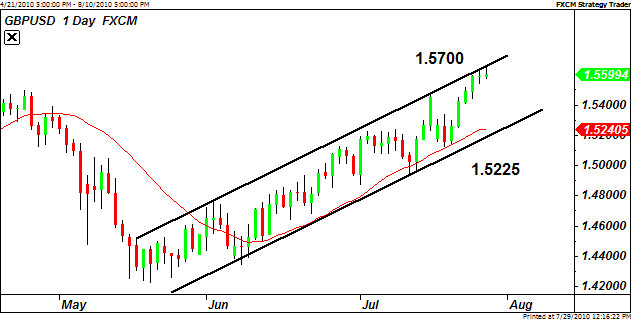 Another solid week of U.K. fundamental releases, including the CBI sales report which reported that 51% of retailers surveyed said that sales were better than a year ago versus 18% that had negative results, added to prevailing bullish sentiment. Domestic demand may continue to improve as the consumer credit report surprised with a 0.2 billion pound increase versus expectations for a 0.1 billion pound decline. A decline in mortgage approvals failed to take the luster off of the U.K. economy as the drop was shallower than forecasts. Meanwhile, the dollar has started to take a hit on the declining interest rate expectations for the U.S. and growing concerns that the weak labor market will derail the recovery. Nevertheless, the U.S. GDP report for the second quarter is expected to show growth of 2.6% slightly off the prior period’s pace of 2.7%. The GBP/USD is testing the upper bound of the current ascending channel which could be enough of a reason for traders to take profits. Additionally, we have started to see risk appetite fade which is a main driver of price action, adding to the case that the pair will remain contained within the formation- increasing downside potential.

Trading Tip – The GBP/USD has erased its earlier gains which could be a sign that the anticipated reversal is already underway. However, we will hold to our set-up as the U.S. GDP report could generate the necessary bullish sentiment to see the upper bound tested. However, retail shorts continue to outnumber longs 1.6 to 1.0 warning of further upside, as it is a contrarian indicator. Therefore, we would remain cautious until we see the herd get substantially long, signaling bearish potential.

U.K. –Minutes from the RBA’s last policy meeting, where they left rates unchanged, indicated that the central bank will look to the upcoming second quarter consumer price index report as a guide for future monetary policy. Expectations are for inflation to have accelerated by 3.4% from 2.9% the quarter prior, which would place it above their target of 2-3%, raising the outlook for a rate hike and potentially providing Aussie support. Slower than expected price growth could sink the commodity dollar as speculation will rise that the RBA’s tightening cycle may come to an end.

U.S. – The pace of U.S. growth in the second quarter is forecasted to have slowed to 2.6% from 2.7% the period prior. Dissipating government stimulus and the end of the inventory cycle are expected to have weighed on output with the consumer not yet ready to take the torch of spending. Signs that the weak labor market is having a greater toll on the economy would sink U.S. interest rate expectations further and potentially weighing on the dollar. The ISM manufacturing survey could have m remarket moving potential as the sector has been the engine of growth and signs of weakness would exacerbate fears. A potential flight to safety does favor the greenback but signs are emerging that the buck could be losing its safe haven status.