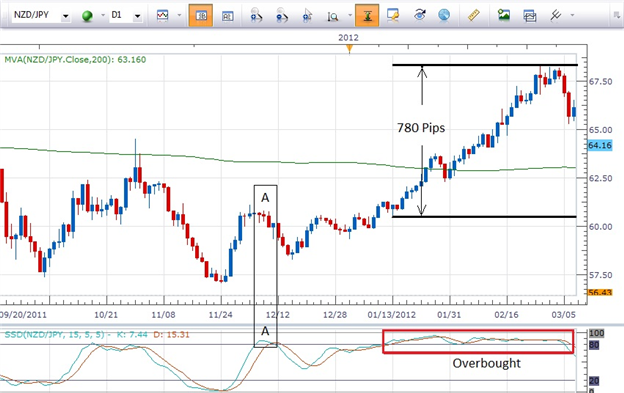 Here's What You Need to Know about "Overbought" and "Oversold"

If you are cooking something and you check on it and you see that it is “overdone”, what is your immediate reaction? Exactly…you take the dish out of the oven. Remove it from what caused its current overdone state and the sooner the better.

What if your car’s engine is “overheated”? Same deal…you do what it takes to get the engine cooled down. Immediately stop doing what caused the engine to become overheated in the first place.

Given these natural reactions, it is easy to see why the initial and almost immediate reaction by many newer traders to an overbought or oversold trading scenario is to do the opposite in that case as well.

They reason that since many buy (long) orders moved price up and pushed the indicator into overbought territory, we must do the opposite and take a short (sell) position. Conversely, if many sell orders caused price to drop and the indicator to move into oversold territory we must begin to take long positions. It’s almost as though they expect price to snap back like a rubber band when it reaches these overextended zones.

Well…what is the proper reaction for casseroles and car engines is not necessarily the right reaction when trading.

When an indicator goes into the Overbought/Oversold areas, remember that it can remain there for quite some time. Just because the RSI or Slow Stochastics indicator reads Overbought for example, does not mean that price action on the pair is like a tightly compressed spring that is going to immediately snap back toward the Oversold area.

Notice on this chart that the first time Slow Stochastics went above 80 into the Overbought area, price continued to go up for another 780+ pips and Stochastics stayed overbought the entire time. Clearly a trader who went short when it first went into Overbought territory would have missed out on a great move. They also would have gotten stopped out of their short position in fairly short order.

To see an example of where price retreats when Slow Stochastics goes into Overbought territory we need to look no further than the area labeled “A” on the chart. In this case the candlesticks around “A”, dojis, spinning tops, shooting star and a hammer, indicate the potential for a pullback.

The point to be made is that either scenario can play out so don’t have a knee jerk reaction to the Overbought and Oversold areas of an indicator.

Only take entry signals from an indicator that is in the direction of the longer term trend.

For example, if the trend has been strong and prolonged to the upside, it stands to reason that the indicator will be in Overbought territory since it reflects the bullish push of price action. To take a short position at that point would be to trade against the trend and that would be introducing more risk into the trade.