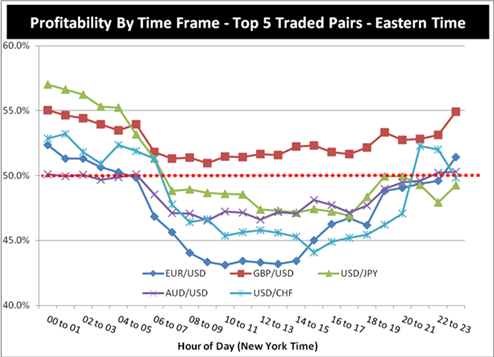 When FX Traders first come to trading platforms, their interest is almost universally drawn to the same vehicle.

This vehicle is typically highlighted, stands out, and is noted as the EURUSD.

The reasons for this popularity make sense. Europe and The United States represent the two largest economies in the world. While the US Dollar remains the world’s most popular reserve currency, the fast rise of the Euro to international prominence brought it to the world’s second most common reserve currency; and this was in an extremely short amount of time.

How Have Traders Fared in EURUSD?

Unfortunately, this rampant popularity in the currency pair hasn’t equated to profits for traders speculating in the currency pair. In the Traits of Successful Traders series, David Rodriguez looked at exactly this question while examining over 12 million live trades, placed by real retail.

The graph below will show the five of the most popular currency pairs, plotting the profitability of traders (running up/down on the left side of the graph) at various times throughout the day (plotted horizontally along the bottom of the graph). EURUSD is represented by the blue line.

As you can see, EURUSD is actually the least profitable pair at many times throughout the day, despite its raving popularity.

Notice that profitability seemed to be far lower on EURUSD during the very active market hours (from 4AM EST to 2PM EST). This is an important point, as this is shortly after London, the largest FX market center in the world, opens for the day and brings a massive amount of volume into the market.

When the US opens for business at 8 EST, more volume is introduced as The United States is the second largest FX market center. Notice that profitability for traders in EURUSD seems to bottom shortly after the US Open (8-11 AM EST).

From the research, it appears as though as volume and market activity increase – trader profitability in EURUSD decreases, and decreases more-so than what was seen in the other most commonly traded currency pairs.

Given the information we have on how traders have fared in the past, we can build an approach based on what has or has not worked for other traders in the past.

The first point of emphasis is that while traders may have been worse-off trading EURUSD during the very active times of the day (The London and US sessions); profitability on EURUSD is actually above or near 50% for much of the Asian Trading Session.

As a matter of fact, after The United States closes for the day at 5:00 EST (shown as 17:00 on the graphic), trader profitability stays above 45% until London opens the next morning.

For traders wanting to speculate on EURUSD, the Asian trading session may be more accommodating than the ‘active’ hours of the day.

One of the primary reasons for this may be in the fact that the Asian session typically sees smaller price movements than what may happen during the very active times of the day. Support and Resistance, generally speaking, will see much more respect during the slower Asian trading session.

In ‘When is the Best Time of the Day to Trade Forex’ David Rodriguez looks at exactly that, and finds that the average movement of the EURUSD currency pair is far smaller than during the Asian trading session than during the active hours of the day. 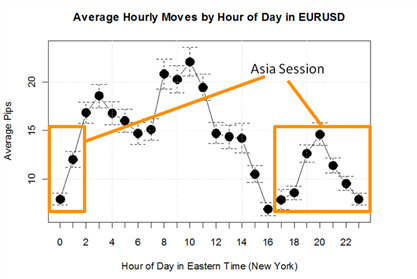 Prepared by David Rodriguez for the Traits of Successful Traders Series

Because of these slower price movements and the fact that support and resistance will have a greater tendency to be respected, traders may find range trading approaches on the Euro-Dollar to be most accommodating during the Asian Trading Session.

Once a trader knows they want to take a range-based approach on the pair, filling in the strategy can be simple. There are numerous materials available from DailyFX to assist traders with their range-trading approaches.

In How to Analyze and Trade Ranges with Price Action, we looked at a mannerism of trading ranges using only price inflections and swings, no indicators necessary. By taking an approach such as this, you can locate the support or resistance in the market as the Asian session opens, and look to buy when price is at or near support; and look to sell when price is at or near resistance:

In the JW Ranger Strategy, Jeremy Wagner brings price action together with the Commodity Channel Index, or CCI, to decide when exactly he might want to trigger into a position.

What if I Can’t Trade the Asian Session?

Given the 24-hour nature of the FX market, and considering that to many FX traders from Europe and the United States, the Asian session is still considered ‘off-hours,’ this was a common reason why traders didn’t look to trade when the market may be more accommodating to their goals.

In ‘How to Trade Forex Majors like the Euro During Active Hours,’ this question is addressed directly by David Rodriguez in the third installment of The Traits of Successful Traders series.

David suggests that, since markets generally exhibit more volatility during the active hours, and this is when traders have been the most prone to TheNumber One Mistake that Forex Traders Make; traders could use this volatility to their advantage by using aggressive risk-reward ratios with breakout strategies. From the research:

“Breakout Trading Strategies tend to do relatively well in volatile environments, so if you plan to trade during these times, look to trade breakouts.”

With breakout strategies, traders are monitoring support and/or resistance; waiting for a break of the price level with the expectation that once the break is made – price will continue running in that direction, allowing for the maximization of profits in instances when the trader is correct.

Previous: All About Currency Crosses