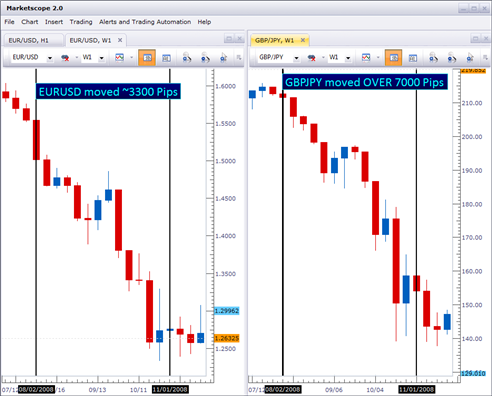 The British Pound – Japanese Yen currency pair is a volatile offering that presents traders with potentially large moves in price relative to many other pairings. This currency pair is, at times, so volatile that it has earned the nickname of ‘The Dragon,’ as well as another well-coined term: “The Widow-maker.”

Whatever you call it, the fact remains the same: GBPJPY can really move.

Take, for instance, the initial throws of the Financial Collapse in 2008. While the EURUSD had, at one point, gone down by ~3300 pips, the top-to-bottom move on GBPJPY was much larger: at one point a loss of more than a staggering 7000 pips.

This volatility can be a good thing, or it can be a very bad thing; depending on how you trade.

Exhaustive research was performed by DailyFX Quantitative Strategist David Rodriguez, examining more than 12 million trades placed by live traders. The goal of the research was to find out how traders were speculating, what wasn’t working, and what we, as an education and research group, could do to help.

The results of the research are shocking, and what was found was that the Number One Mistake that FX Traders Make often revolves around risk-reward ratios; that is, how much is lost on losing trades against how much is profited on winning trades.

From the research, David states:

“Traders are right more than 50% of the time, but lose more money on losing trades than they win on winning trades. Traders should use stops and limits to enforce a risk/reward ratio of 1:1 or higher.”

GBPJPY is an extreme example of this fact.

From our research, we can see that traders are correct a whopping 66% of the time on GBPJPY! 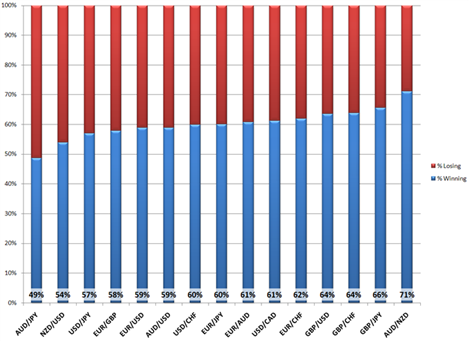 But exactly as David had found in the research, this robust winning percentage didn’t translate into profits; as traders took far larger losses when they were wrong than profits when they were right: 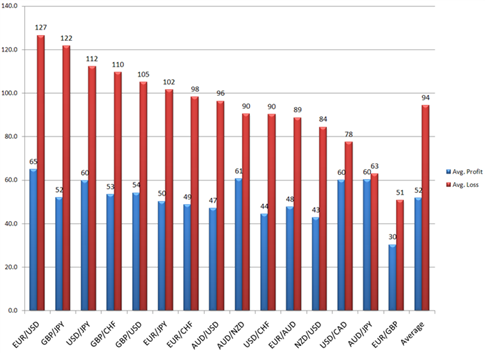 Traders win, on average, 52 pips on GBPJPY trades when they are right; but when they are wrong, they lose a monstrous 122 pips. From the above chart, GBPJPY is showing the lowest ratio of pips won v/s pips lost (on average).

This type of risk-reward ratio puts traders in a precarious position; as to be profitable over the long-term one would have to be right about 75% of the time (3 out of 4) to be able to hope for a net profit.

I don’t know about you, but there are very few things in life I want to expect to be right 75% of the time with; least of all anything that could cost me money when I am wrong.

Trading a currency pair like GBPJPY could be optimal for traders looking for volatility or large moves; but it should be noted that those moves aren’t always very smooth; which is exactly why overall profitability wasn’t higher on the pair.

The first point of emphasis is that given the above points, trading in GBPJPY should always entail a protective stop-loss order. Lack of doing so exposes the trader to significant risks as the pair may trend for an extended period of time.

Due to this volatile nature, and given the fact that the pair could trade with very wide swings in either direction, breakouts can be an attractive approach when trading GBPJPY. This will allow traders to maximize profits on the large swings when they are right; while also allowing them to cut their losses short as the big swings move against them.

With breakout strategies, traders are monitoring support and/or resistance; waiting for a break of the price level with the expectation that once the break is made – price will continue running in that direction, allowing for the maximization of profits in instances when the trader is correct (which is yet another reason stop losses are important, as those extended moves can cost significantly in instances when the trader is incorrect).

For traders speculating in ¥-denominated currency pairs, Ichimoku may also be a relevant manner of analysis. Ichimoku is a popular technical system that was developed in Japan before World War II. Its staying power as a popular mechanism for initiating trades has continued, as the system is still widely in use today.

Ichimoku is often used as a trend-following system, but with a slight modification can be used to trade in breakout-style scenarios.

A large part Ichimoku is ‘The Cloud,’ which is a moving area of support or resistance plotted on the chart. When price breaks through either side of the cloud, the trader can often look to trade breakouts by placing a trade in that direction. 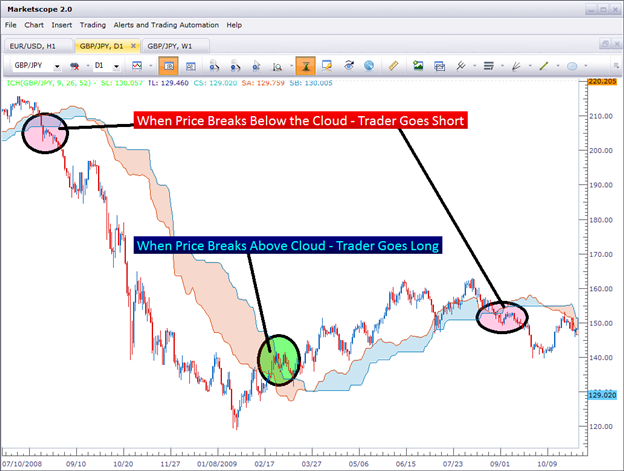