EUR/USD Trading Basics: What Is EUR/USD And Why Trade It?

According to the Bank for International Settlement (BIS), which compiles statistics in cooperation with world central banks to inform analysis of global liquidity, among other things, the US Dollar and the Euro are the two most traded currencies in the world. And EUR/USD is the most traded pair. It is important to note that the BIS is a good resource to gauge the size of the $6.6 trillion global interbank market, but that non-institutional, or retail and/or individual investors, do not engage in trading directly in the interbank market. Instead retail investors engage in trading with a Registered Foreign Exchange Dealer, which acts as a counterparty to all of its customers’ trades.

Once every three years the Bank for International Settlements (BIS), often called the central bankers’ bank, conducts an in-depth survey of the global foreign exchange (FX) and over-the-counter (OTC) derivatives markets. The most recent look was in April 2019 and it emphasized again just how important the US Dollar and the Euro are in the currency markets.

It calculated that the US Dollar was on one side of 88% of all trades, with the Euro in second place at 32%. Trading in EUR/USD accounted for almost a quarter of all FX trades, according to the BIS survey. 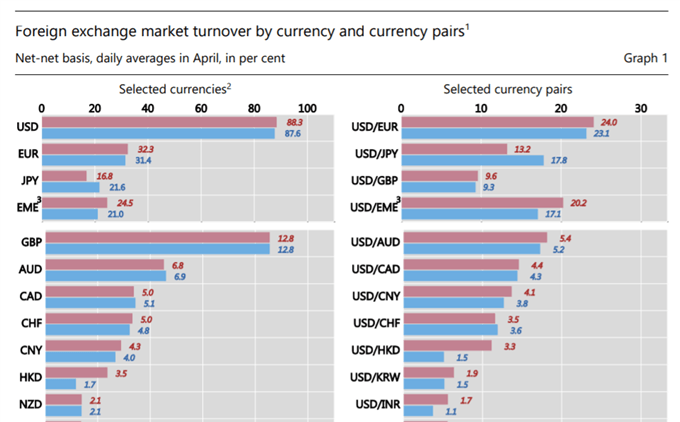 Source: BIS (You can click for a larger image); EME = Emerging Market Economies

Recommended by Martin Essex, MSTA
Get Your Free USD Forecast
Get My Guide

Where to trade EUR/USD

Because trading in EUR/USD is such a high percentage of the total, the pair can be traded in any of the major currency centers: the UK, the US, Hong Kong, Singapore and Japan, as well as smaller centers such as Australia. Of note: in these major centres, retail investors engage in trading with a Registered Foreign Exchange Dealer, which acts as a counterparty to all of its customers’ trades.

The period between the close of US exchanges and before Asian markets open is typically the most reserved period for trade during a standard day. In contrast, the crossover of European late afternoon and morning New York trading hours is normally the most active.

The depth and liquidity of the EUR/USD market allows for all classes of traders to be active, including central banks, investment banks, commercial banks, fund managers, corporates, retail traders and many more. Some, like the corporates, may be hedging their exposure, while others are investors and some act in a speculative capacity. For retail traders in particular – individuals who trade FX part-time or full-time through a broker – it is particularly attractive because spreads can be tight, meaning the cost of buying and selling can be held low.

It may seem obvious but, as with any currency pair, it is crucial to pay attention to both sides of the equation. In the case of EUR/USD, it is important to monitor what is happening in both the US and the Eurozone – those EU countries that have adopted the Euro as their currency.

It is therefore affected by economic data on both sides of the Atlantic, by Federal Reserve and European Central Bank (ECB) decisions, by US and European governments’ actions, by political developments, by the spread between government bond yields in the US and Germany – the Eurozone’s largest economy – and numerous other relative factors.

Note, for example, that when the ECB eased monetary policy in June 2014 by introducing the first in a series of so-called targeted longer-term refinancing operations, or TLTROs, and cut its deposit rate below zero, EUR/USD found itself in a prolonged period of weakness that lasted until March the following year. 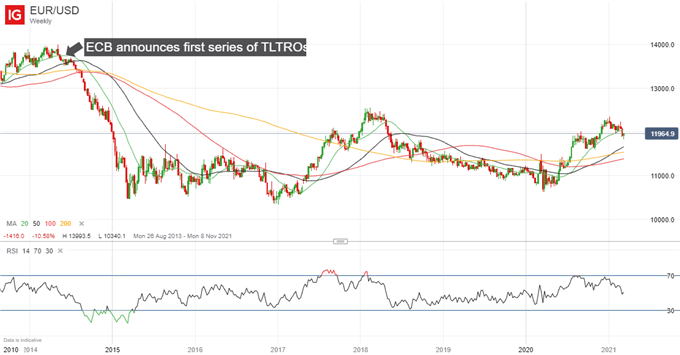 Moreover, EUR/USD is a good barometer of general market sentiment. The US Dollar is widely seen as the safest of safe havens for investors looking to reduce their risk, so EUR/USD tends to fall when traders are pessimistic and rise when they are more willing to look at riskier assets, even though the Euro is by no means the riskiest.

Tips for technical traders in EUR/USD

Because turnover is so high in EUR/USD, technical strategies tend to work well. As with other currency pairs and crosses, some traders will use one of the many technical techniques in isolation while others will combine fundamental and technical analysis, perhaps using the former to decide on a strategy and the latter to determine entry and exit points.

Note in the chart below, for example, that when the 14-day relative strength indicator (RSI) gave an “overbought” signal in early March 2020 there was a swift move lower and that when resistance from a trendline that marked the upper limit of a downward sloping channel was broken in mid-July 2020, there was an immediate move higher. This is only an example and past performance is not indicative of future returns. 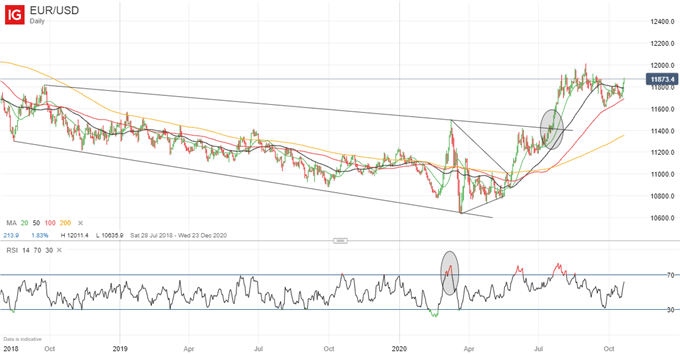 To summarize, the breadth and depth of the EUR/USD market makes it unique and perhaps an appealing terrain for retail traders just starting out – as well as those with years of experience. It may not be as volatile as many other markets but volume will be substantial enough for traders to navigate in and out of trades.

As well as fundamental and technical analysis, psychological techniques deserve consideration in any strategy. From gauging the mood of the general market in a spectrum between panic and mania to calculating personal risk management, this can often present the most crucial insight for analysis and strategy development.

There is also plenty of positioning data to monitor. The US Commodity Futures Trading Commission’s weekly Commitments of Traders (COT) reports on the major futures market participants offer insight for those with frequently longer duration intention.