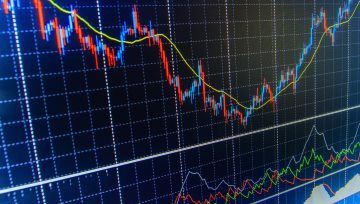 How to Trade with Stochastic Oscillator

How to Trade with Stochastic Oscillator

Traders are constantly looking for ways to catch new trends that are developing. Therefore, momentum oscillators can provide clues when the market’s momentum is slowing down or shifting up, which often precedes a shift in trend. As a result, a trader using stochastic can see these shifts in trend on their chart and in some cases, in the very early stages of the move.

As you can see from the picture above, the short term trends were detected by Stochastic. But, there were multiple episodes where a signal showed on stochastics but the trend did not continue in that direction, which is a common element when dealing with any technical indicator, especially oscillators. However, traders can look to strengthen the signal in a number of ways, two of which we’ll look at below.

1 - LOOK FOR CROSSOVERS AT EXTREME LEVELS

Naturally, a trader won’t want to take every signal that appears. Some signals are stronger than others. The first filter we can apply to the oscillator is taking cross overs that occur at extreme levels.

Because stochastics is an oscillator, it’s bound between values of 0-100. The region from 0-20 can be considered ‘oversold’ territory while 80-100 can be looked at as overbought. Traders can simply wait for a stochastic signal showing in oversold territory for shorts or overbought for long setups.

The below chart is looking at the same setup as above, but this time we’ve relegated signals to only those that take place in overbought or oversold territory. This limits the number of signals generated but it still allows for some of the stronger signals which often show in that oversold/overbought territory.

The second filter we can look to add is a trend filter and this can be done in multiple ways. The goal is to essentially filter the signals that’s generated by the indicator, allowing the indicator itself to function more like a ‘trigger’ than a black box to generate signals.

This can allow for an element of a market’s trend bias to come into the equation, so traders can look to buy in uptrends or sell during downtrends.

This also can allow the indicator to provide built-in closing logic, as the contra signal would be to close the position. So if price is above the 50 day moving average, the trader is looking for a bullish stochastic signal to trigger the position, which could then be closed on the bearish stochastic crossover signal.

On the below chart you’ll notice even fewer signals than the above examples, and there’s zero bearish signals. The reason for this is due to the fact that stochastics did not show a bearish signal while price was below the 50 day moving average.

The moving average trend filter did eliminate a couple of the stronger moves that generated from the above examples. But, there was also a stronger degree of consistency in the signals that were generated below since those signals were only activated in the direction of the general trend, as denoted by the 50 day moving average.