Overbought vs. Oversold and What This Means for Traders

Like many professions, trading involves a lot of jargon that is difficult to follow by someone new to the industry. This article will outline what it means for a currency pair to be overbought or oversold, and what trading opportunities arise from these situations.

These two terms actually describe themselves pretty well. Overbought defines a period of time where there has been a significant and consistent upward move in price over a period of time without much pullback. This is clearly defined by a chart showing price movement from the “lower-left to upper-right” like the chart shown below. 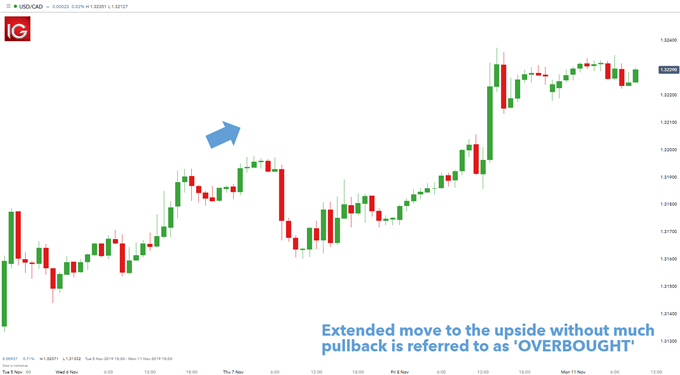 The term oversold illustrates a period where there has been a significant and consistent downward move in price over a specified period of time without much pullback. Essentially, a move from the “upper-left to the lower-right” – see chart below. 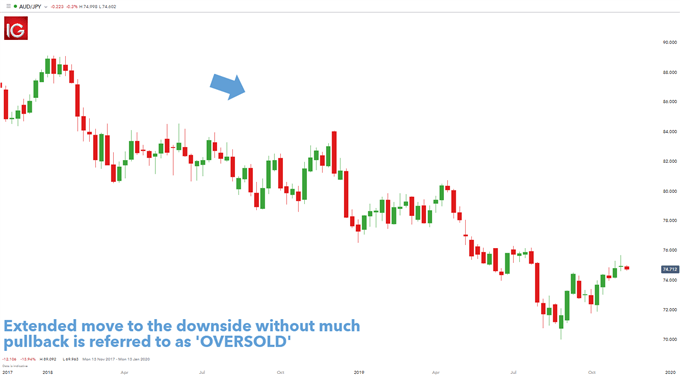 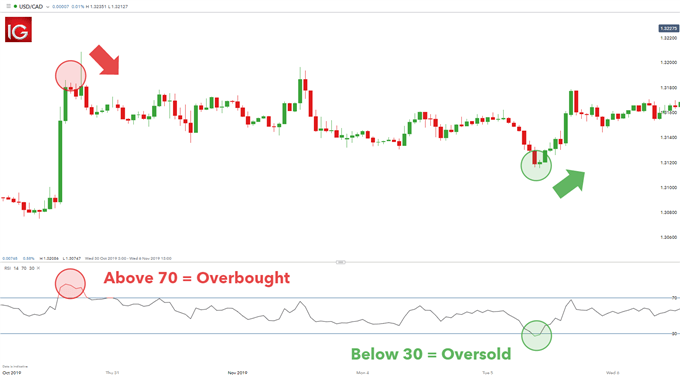 Traders need to be patient before entering trades using the RSI as on occasion the RSI can stay overbought or oversold for a prolonged period as seen on the chart below. A common error made by traders is attempting to pick a top or bottom of a strong move that continues to move further into overbought or oversold territory. The key is to delay until the RSI crosses back under the 70 or over the 30 as an instrument to enter. 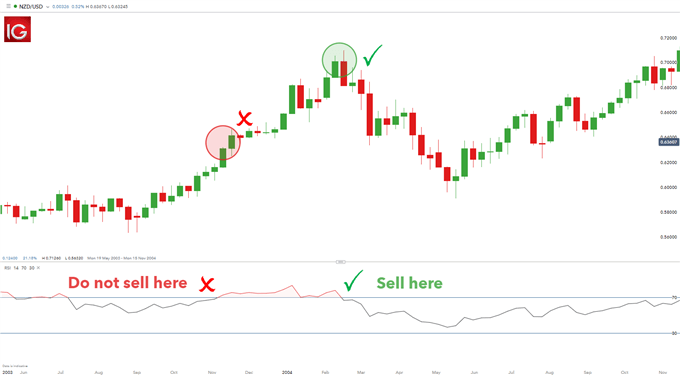 The image above shows the RSI clearly breaking above the 70 level resulting in an overbought reading, but a seasoned trader will not look to immediately sell because there is uncertainty as to how far price could continue to rally. Traders ideally will wait until the RSI falls back below 70 and then place a short trade. This gives a better entry and a higher probability trade. When the RSI falls below 30, same rules apply.

How reliable are overbought and oversold signals?

Overbought and oversold signals as a solitary signal is not entirely reliable. Think of building a house; a builder is reliant on a hammer but as an isolated tool, the hammer is worthless when building an entire house. Other tools will be needed in conjunction with the hammer for construction – saw, drill etc. The same concept relates to overbought/oversold signals which requires complimentary tools to strengthen the signal, and eventually allow traders to make sound trade decisions. For example, trend identification, risk management and sentiment are useful tools that help compliment overbought and oversold signals.

What can traders do to strengthen/support overbought and oversold signals?

There are several common tools that can be used to compliment overbought and oversold signals. Below is a list of tools that can enhance your trading decisions:

Recommended by Warren Venketas
Use TOST to discover the secrets of successful traders!
Get My Guide

BECOME A BETTER TRADER WITH THESE TRADING INSIGHTS