What is Consumer Sentiment?

Consumer sentiment, consumer confidence or the Index of Consumer Sentiment (ICS) is used as a barometer for overall economic health by market participants as determined by the consumer. The reading encompasses consumer and household opinion based on various survey questions including previous, current and future economic viewpoints on personal finances and the broader economy. The report will read similar to the economic calendar shown below and comprises inflationary prospects as well.

Economic surveyors traditionally approached consumers and posed questions to them which are similar to the current set of questions shown below. The questions are meant to evoke opinions from consumers about their feelings with regard to their finances.

The consumer sentiment survey in the U.S. was created by Dr George Katona from the University of Michigan and first used in 1946, addressing the emotional state of consumers as opposed to purely quantitative metrics – hence the name ‘Michigan Consumer Sentiment’. The idea behind this type of survey is to try and understand how people make economic decisions in order to properly manage the countries policies. The questions below are designed to be timeless in that the survey would be fitting for people in the 1960s or the present day. 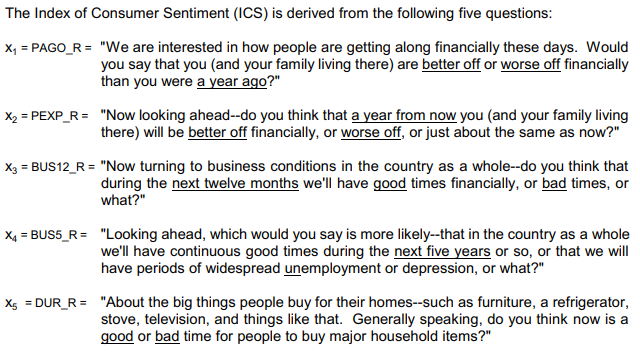 How to Read and Interpret the Consumer Sentiment Index

The consumer sentiment reading is quite intuitive and easy to read for the laymen. The results from the survey are collated and calculated to provide the different readings included in the report. The Index of Consumer Sentiment (ICS) is produced by using the formula shown in the image below. The formulas do differ between constituents but for the purposes of this article we will focus on the main print and formula.

The data is then graphically presented (see chart below) showing recessionary periods (grey) against the ICS – consumer sentiment can be suggestive of impending recessions. Simply put, the higher the sentiment number, the more confident consumers feel about their economic situation (and vice versa). 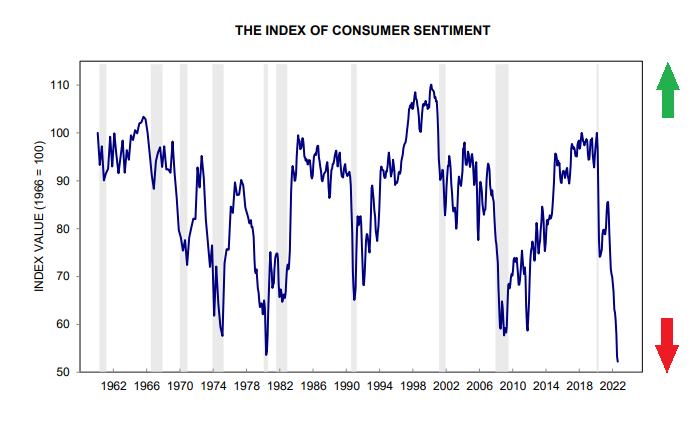 Consumer Sentiment and its Relationship with Inflation

Inflationary pressures can be scary times for consumers as we can see in the 2020 – 2022 comparison chart below. The upward pressure on prices show a corresponding decline in consumer sentiment developing recessionary fears in financial markets. This knock-on effect does not make the job of central banks easy as the traditional monetary policy approach of hiking interest rates to quell inflation often leads to a further decline in consumer sentiment due to rising borrowing costs.

Understanding the mechanics of the consumer is key to properly manage monetary and fiscal policies. For example, when consumers ‘believe’ that inflation is unlikely to subside, the natural reaction function is to stockpile and buy more goods now to avoid paying higher prices later on. This then adds to higher inflation, highlighting the importance of central banks to instill confidence in the consumer that they will reduce inflation. The wording of central bank officials is extremely important to essentially persuade consumers in the direction they want for the desired outcome.

How to Trade Consumer Sentiment

The chart above shows the relationship between U.S. consumer sentiment, the Dollar Index (DXY) and the SPX index respectively. Let’s now look at each one individually.

CONSUMER SENTIMENT IN THE STOCK MARKET

Historically, we have seen that U.S. consumer sentiment and the SPX have a somewhat inverse relationship as extreme drops in consumer sentiment are often succeeded by large upswings in the S&P 500 index. This is simple logic as a fearful market environment often poses opportunities for investors to capitalize on discounted stocks (cheap). The reverse is true in an overconfident landscape where the ‘smart’ or larger institutional investors tend to be fearful while greedy investors continue to invest resulting in significant downside once the market turns.

In summary, consumer sentiment can be used as a contrarian indicator for the U.S. stock market when it exhibits large variations. There are obviously exceptions to this rule of thumb depending on the context at that time where traditional economic principles sometimes fall out of sync.

CONSUMER SENTIMENT IN THE FOREX MARKET

From an FX perspective, U.S. consumer sentiment generally exhibits a positive association with the U.S. dollar. The theory suggests that a fall in consumer sentiment should lead to looser monetary policy to stimulate consumer spending on durable goods – lower interest rates should weaken the home currency (DXY) and vice versa. As mentioned under the stock market relationship, there are allowances for deviation. 2022 is a prime example of how this conventional relationship does not work. The fundamental backdrop in 2022 comprises high inflation, recessionary fears, geopolitical instability and declining consumer sentiment. In this case, the Federal Reserve maintained an aggressive/hawkish stance to combat inflation while consumer sentiment falls; allowing the dollar to strengthen from both a safe-haven standpoint and increase in interest rates.

Consumer sentiment carries with it an insight into many other fundamental facets of an economy, leading to a better understanding of the financial markets. This leading indicator can be used as an important trading tool to enhance your trading style whether you are a fundamental or technical trader. At DailyFX, we regularly cover consumer sentiment overviews and unpack what the data means for markets but if you are unsure about the principals behind certain economic concepts don’t hesitate to head back to out trading education section to build your knowledge.