The World is more connected today than ever before. And while this comes with both positive and negative consequences, for a long time globalization was largely considered as a positive economic trend with symbiotic benefits. This has enabled the world to lift more people out of poverty than ever before, driving education and healthcare into areas of the world that haven’t enjoyed those types of advances in the past. And for the developed world, this offered the potential for growth as those economies further evolved away from industrialization and towards services as emerging markets took on industrialization in the effort of growth. 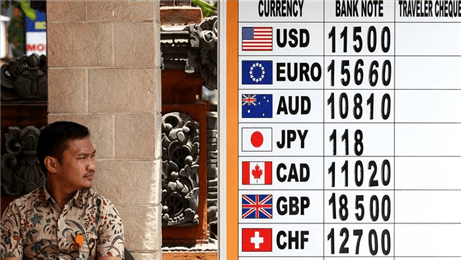 It also opens up considerably more options for traders, investors and money managers, as there’s now a litany of additional growth opportunities available. But, it’d be incorrect to cast a systematic approach towards such an initiative because this would fail to account for the nuance of each individual region or society; the very same factors that make that part of the world unique and its own. And this is what can make the prospect of Global Macro investing difficult, especially for new traders or analysts.

What is Global Macro?

Global macro is an investment or analysis approach that focuses on macroeconomics in the global economy. This will often be extrapolated down into smaller pockets of the global economy, looking at regional and national relationships and how those might impact each other. A good example of this is the relationship between Canada, Mexico and the United States, which will be expanded on in deeper detail later in this sub-module.

Global macro analysis will often focus on the macroeconomic outlay in these key economic areas in the effort of devising strategy and creating projections. This can include concentrating on fundamental data points such as GDP or CPI, or perhaps even rate policy at the representative Central Bank. But, this can also take on policy parameters by looking at the political landscapes and potential shifts in these economies in the effort of projecting what may happen in the future to other related economies.

One of the most attractive parts of a global macro focus or strategy is the fact that this focuses intently on systematic risk, which is a rather unavoidable factor that will likely bring some element of impact to most trading strategies in one way or the other. Focusing on this – specifically on the risk side of the coin – may help an investor or analyst get a more well-rounded picture on the markets that they’re focusing on. 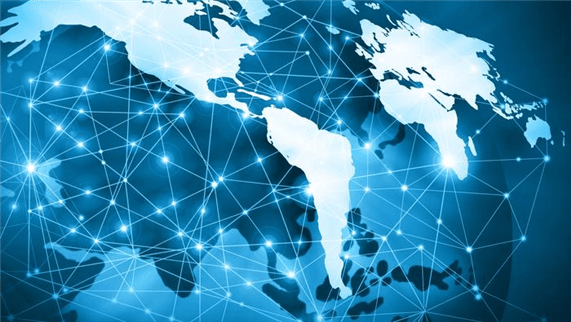 What is Global Macro Trading?

As described by famed money management firm, Doubleline, macro can be characterized as ‘go anywhere, do anything.’

This is an extremely flexible strategy as it opens up a considerable number of options for the trader, analyst or investor. The counter-side to that, which is often present in the realm of markets, is that keeping up with global macro can be a more daunting task, considering that economic events are literally taking place 24 hours per day rather than just the business hours of ones’ own domestic economy. This can be even more reason to follow an economic calendar as a rate decision in Mexico may bring impact in Norway. The linkage, in this case and many others, is commodities, as both Mexico and Norway have considerable operations in oil extraction.

Recommended by Dimitri Zabelin
Building Confidence in Trading
Get My Guide

Global macro trading will often focus on large asset classes such as equity index futures, commodities, foreign exchange and, even individual stocks on some occasions.

Global Macro: Why is Systemic Risk So Important?

Have you ever bought a stock based on good analysis, and with strong rationale; with the following days showing the opposite reaction from what you had expected, with the stock price going down instead of up?

While this could be for any number of reasons, the fact of the matter is that the environment is important – and if stocks in that economy are in a steep sell-off, even the strongest of companies may not remain unscathed. Take for example the sell-off in February and early-March of 2020 as the coronavirus pandemic was getting priced-in. Even high-flying stocks like Amazon, Tesla and Apple were hit incredibly hard, with each dropping by more than 20% in about a month. It didn’t matter at that point what Apple’s earnings guidance looked like – or how many cars Tesla said that they’d sell. What mattered was global equity markets that were aggressively selling-off; and that dragged down even the strongest of high-flyers along with it. (To learn more about cyclical stocks or defensive stocks, feel free to check out our sub-module for ‘Understanding the Stock Market.’)

That is systematic risk. Systematic risk is market-wide risk that can invariably impact individual investments and, at times, may even supersede the specific details of that individual stock. So, Apple’s got improved earnings guidance, a new iPhone on the way and perhaps even a new product in the pipeline that they have yet to announce? So what – if the market is going down, this may not mean that any of those positive details lead to higher share prices for Apple.

This is why investors should want to focus on systematic risk – because stock markets do not always go up.

How to Incorporate Global Macro into Your Trading Analysis

If you’re an FX trader you likely already have some allocation of your attention tilted towards global macro, as interest rate policy at Central Banks is often a big factor in this equation. But the ‘global’ part of the term is what makes this most interesting, as those additional opportunities are what can allow for investors to more granularly control their portfolios.

Regional relationships are of extreme importance in the global economy; and going back to our example of systemic risk – there’s a similar factor at play here. Take Mexico, for instance. Mexico is the 15th largest national economy (IMF, 2019 estimates) and, on its own, is a powerhouse. But – it’s also highly-dependent on their neighbors to the North because it’s that same demand from the US that allows Mexico to import investment capital and export raw materials and finished products.

So if the US goes into a recession, for whatever reason, it’s unlikely that Mexico remains unscathed. As a matter of fact, they may get hit even harder than the US as the trading partner that they’ve come to depend on may not be able to continue driving investment capital into their economy.

These relationships exist all over the world, in a number of different ways – and that’s where Dimitri Zabelin’s Core-Perimeter model comes into the equation. 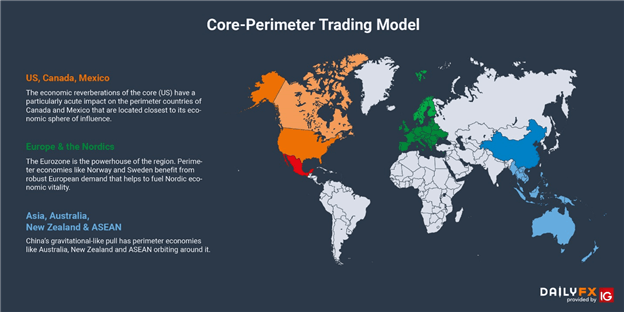 Global Macro: What is the Core-Perimeter Model?

Three economic powerhouses are the primary drivers of the global economy: the US, China and EU. Surrounding each of these growth nodes are perimeter economies that strongly rely on the performance of the core. These are typically export-oriented countries whose fortunes oscillate with greater frequency and magnitude to changes in the global business cycle and underlying market sentiment than their core counterparts.

Assets within these perimeter countries frequently carry higher yields, offering more generous returns for the additional risk investors incur when they invest there. In an environment where markets are generally optimistic about the outlook for global growth, traders prioritize returns over safety and usually opt for comparatively riskier – that is, more cycle-sensitive – assets. This is then reflected in capital flowing to export-oriented countries; or rather from core to perimeter.

However, in a market downturn, investors are animated by a desire to preserve capital (or at the very least to minimize losses) rather than maximize returns. In this situation, investors usually shift to assets offering lower yields but that are less risky. This is usually reflected in capital flowing out of perimeter economies and into the core, where it is parked until conditions improve.

The Core-Perimeter framework allows traders to understand the macro-fundamental interactions between powerhouse economies and their perimeter counterparts, offering valuable insight on how to trade the assets embedded in these relationships.

What Follows in this Sub-Module:

In the following five pages of this sub-module, we dig deeper into the core-perimeter model by incorporating a regional focus. Dimitri has broken up this analysis into five pieces, by first focusing in on Europe along with trading partners in Norway and Sweden, and then spanning into China and the United States. Each of those pieces are linked below and, as always with DailyFX Education, you can use the built-in navigation located on the right side of the page (or at the top of this page) to navigate to the next article in the series.