For thousands of years, Gold has been praised for both its physical and economic appeal, becoming one of the most popular safe-haven assets.

This article will discuss Gold as an investment and as a tradeable commodity and will look to explore the main drivers of price action.

Gold as an Investment

In ancient history, gold was desired by many for its unique beauty and scarcity, making it a highly desirable commodity as well as a symbol, and eventually a store of wealth. However, as time progressed, the gold standard was adopted as a form of global currency and now, even though the fiat system has replaced it in its entirety, gold continues to hold intrinsic and economic value, making it a popular investment in financial markets.

As discussed in the what is gold article, there are a number of factors that may influence it as an investment including:

Although most commodities are subject to supply and demand, gold is almost always in demand, whether it be for jewelry, industrial uses or as a form of safe-haven currency.

A few unique characteristics that contribute to gold’s success include it’s scarcity, ductility and its ability to withstand corrosion, making it a versatile metal with many uses . However, the demand for gold is also largely attributed to its ability to retain value during periods of financial duress.

During economic slumps, the demand for gold as an inflationary hedge often increases, confirming it’s safe haven appeal. As far as supply is concerned, once gold has been mined and has gone through the refinery process, due to its resilience against corrosion, gold remains in supply, being transformed into gold bars, coins, jewelry, etc.

Unlike paper money, gold is a physical commodity which has no default risk and is not impacted by government policies. During periods of economic uncertainty such as a financial crisis or political instability, central banks may intervene by decreasing interest rates or printing more money, leading to a rise in inflation and a depreciation of currencies. Whilst this may result in a loss in purchasing power of paper money, gold may be used as inflationary hedge, making it a popular investment during these times.

Because gold is generally traded against the US Dollar, changes in the currency tend to have a direct impact on the gold price. A stronger Dollar generally makes gold more expensive for other countries to buy, resulting in a decrease in demand and therefore, a drop in the gold price. The opposite is true when the Dollar depreciates in value. However, risk sentiment also plays a role in the inverse relationship between gold and the greenback.

During economic slumps or periods of increased volatility, the demand for currencies and stocks may decrease as investors increase exposure to gold, and other assets holding intrinsic value.

Gold as a Tradeable Commodity

Although coins, gold bars and bullion are still collected and central banks generally still keep a certain amount of gold in reserves, the easiest way to gain exposure to the precious metal is by trading it on exchange, investing in gold companies or trading ETFs which track the gold price.

The same factors that influence gold as an investment will likely influence it as a tradable commodity but because the gold market is so large, high trade volumes, combined with amble liquidity and almost 24 hour trading, allows for tighter spreads, making gold relatively inexpensive to trade. In fact, the World Gold Council estimates that the average daily trading volume in gold is higher than majority of currency pairs, with the exception of three major currency pairs, namely EUR/USD, USD/JPY and GBP/USD.

When it comes to trading gold, price action is influenced by a variety of factors including trading psychology as well as technical and fundamental analysis. Although a variety of strategies exist, an all-encompassing strategy, combining these three forms of analysis may provide additional benefits.

The process of technical analysis involves identifying patterns off of charts in an attempt to identify current market conditions and trends that have occurred in the past and may occur in the future, using price action and technical indicators as a guide.

Although determining the trend may sound simple, deciding on an appropriate time-frame can be a challenging task. While intraday traders often make use of short-term charts to determine potential entry and exit signals, there are benefits to multiple time-frame analysis, which includes analysis from both long and short-term charts.

For novice traders, four effective trading indicators include the Moving Average, Relative Strength Index (RSI), Moving Average Convergence/Divergence (MACD) and the Stochastic, while more experienced traders may use more complex tools such as the Fibonacci retracement or Elliot Wave, in conjunction with other indicators.

An example of this can be seen in the Daily chart below, where the Fibonacci retracement is taken from the most recent major move (between March 2020 Low and the August 2020 High). Since retracing from this level, these retracement levels have formed support and resistance for price action, forming areas of confluency, which has somewhat transformed market conditions from a trending to a rangebound state. 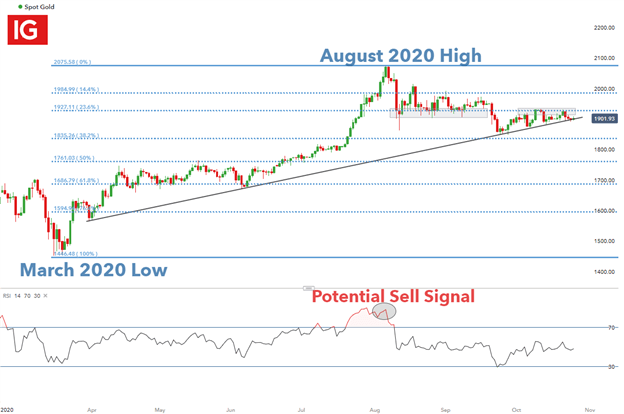 By adding the Relative Strength Index (RSI), a trader may be able to identify potential signals as indicated above. When the RSI is above 70, the market is considered overbought and when the RSI falls below 30, it is considered to be oversold. It is important to remember that market conditions are subject to change, but if a trader is using the RSI during a trending phase, when the trend ends, they may shift towards a RSI range trading strategy.

While technical analysis focuses on chart patterns, assuming that everything has already been priced in and accounted for, fundamentals believe that economic events are the main drivers of price action. Although neither is incorrect, during a recession or economic uncertainty, changes to policies are often sporadic and have a tendency to influence risk sentiment without prior warning.

When we refer to fundamentals, broadly speaking, this is the economic wellness of a country or economy. Data such as GDP, inflation and interest rates all form part of fundamentals. When investors are confident in the state of the economy, they are more likely to invest in riskier assets, such as stocks. But, when interest rates are low and there is a lack of confidence, this is referred to as risk-off sentiment, where investors are more likely to invest in gold, US treasuries and other safe-haven assets.

Recommended by Tammy Da Costa
Is it possible to trade for major news events?
Get My Guide

A few examples of economic data that may have an affect on gold prices include GDP data, unemployment figures and interest rate decisions. Although the effects of these decisions may not be instantaneous, the Dailyfx economic calendar is a useful tool for traders to remain informed about high impact data that may affect the markets.