8 Women in Finance Leading the Way

8 Women in Finance Leading the Way

Among the world’s largest economies, women make up more than 50% of the labor force in financial and insurance activities, according to 2020 research from Catalyst. But Catalyst also found only a small percentage of women in finance and financial services reach the ranks of global leadership.

Signs point to change. Opportunities for women in finance, trading, investing and related areas are growing as a result of shifting social and economic trends and the women breaking ground, and using their talents to make positive change.

Recommended by Izaac Brook
Design a strategy to trade when news crosses the wires.
Get My Guide

The careers of women in finance and markets—ranging from portfolio management to psychological coaching - are as diverse as their trading strategies. Cathie Wood’s career stops range from economist to portfolio manager to entrepreneur. Today she is CEO and CIO of Ark Investment Management, which offers ETFs focused on tech innovation. The firm’s Big Ideas 2021 highlights areas in which it sees opportunities, including delivery drones, autonomous ride hailing, orbital aerospace and deep learning.

Wood founded Ark in 2014 after 12 years as AllianceBernstein’s CIO of Global Thematic Strategies. Her firm’s flagship ARKK fund became one of Wall Street’s hottest names, with an annual return of over 150% in 2020.

More recently, Ark funds face challenges as rising Treasury yields threaten tech trades. Despite volatility, Wood has held her ground and even added to her positions in these stocks. “The bull market is broadening and this will be good for our funds long-term,” she told CNBC.

Samantha LaDuc is the founder of LaDuc Trading, a macro-to-micro trading strategy firm. Macro-to-micro is an approach that looks at a market’s macroeconomics and then drills down into the case for a bullish or bearish approach. Check out our interview with Samantha LaDuc, where she elaborates on her macro-to-micro approach and answers questions on options trading and women in trading. “When I started as a trader I focused on market-moving news that would create volatility in the instrument of choice, but I was also technically analyzing based on patterns,” said LaDuc. The trader, who hosts a series on women in finance and trading, says the industry, and particularly options trading, remains male dominated. “It’s encouraging for women to find me, because they don’t see themselves represented, and you can’t be what you don’t see.”

Denise Shull’s career sounds a lot like a storyline from Showtime’s Billions, and in fact, Shull consulted with the creators of the show. Shull is the founder of TheReThink Group, a psychological coaching firm that helps train Wall Street traders, pro athletes and others in high-performance, risk taking careers to win under pressure. Her ideas on winning are outlined in “Market Mind Games,” which dives into the psychological factors surrounding decision making. “Billion dollar bonfires and market minion meltdowns stem from single matches of the mind being lit with the kindling of uncertainty,” writes Shull, who says she’s now working on a new book.

With a world focused on finding or protecting jobs for millions, bringing an epidemic under control, and market jitters over the possibility of inflation, organizations need leaders who can guide people and markets through stock market volatility. Janet Yellen and Christine Lagarde are two such women leaders who have been tapped to navigate critical institutions through these remarkable times. Janet Yellen is the first woman to take the helm at the Treasury Department, where she is leading US fiscal policy and pledging to help workers while battling colossal challenges: unemployment and climate change.

European Central Bank President Christine Lagarde is focused on “greening” the EU financial system, at the same time she’s trying to hasten the EU’s economic recovery. “While we believe that 2021 will be the year of the recovery, we don’t see it happening until the second half of (20)21, and we believe that any yield increase that would operate a bit as a brake would be undesirable,” she said at a recent press conference. Read more in Three Women Leaders Changing Finance, Economics and Business

Mary Barra is also leading change. As the CEO of GM, America’s largest automobile manufacturer, Barra is driving the transition to vehicles powered by green energy. She recently laid out plans to transform GM’s lineup into electric vehicles and has made valuable acquisitions in the autonomous vehicle and battery technology sectors. 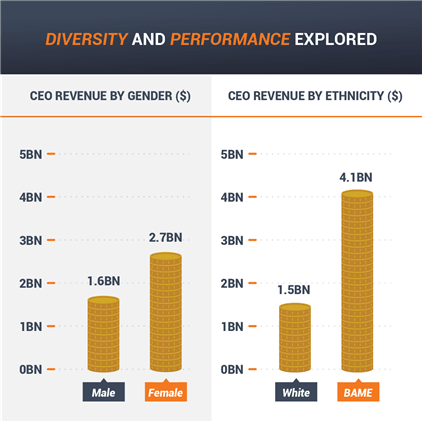 From DailyFX Research: Diversity in CEO’s from the FTSE 100 Companies

Research shows that companies such as GM with diverse leadership, boards, and governance tend to outperform the market. Many investors are looking to add female-centric organizations to their portfolios and investments such as the Barclays iPath Women in Leadership ETN are designed to capitalize on this interest. 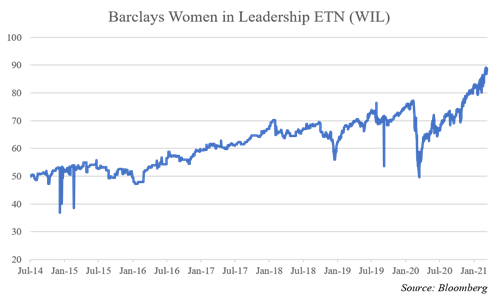 The ETN seeks to track the performance of the Barclays Women in Leadership Total Return USD Index, which provides exposure to US companies that satisfy the gender criteria of a female CEO or at least a 25% female board of directors.

The advent of social media has given traders access to instant information from other traders, news sources, politicians, and more. While the established financial industry remains dominated by men, women in finance are building new paths to success by using social media and other innovations. One area where women are making a mark is financial twitter, or #fintwit. Caitlin Cook, perhaps best known as @DeadCaitBounce, is an internal wholesaler for a global asset manager and a rising star in the FinTwit world. She’s quickly attracted notice among some of the biggest names in the business. DailyFX Strategist Peter Hanks sat down with her to discuss how they’ve used Twitter to build a stronger network, the rise of “cult-like” investments and gender equality in the finance. Read details in FinTwit, Women and Trading: An Interview with @DeadCaitBounce.

At age 22, Lauren Simmons became the youngest full-time female trader at the NYSE and the second African American woman to hold the position. She exemplifies women in finance who chart their own path to success. Lauren joined DailyFX’s Trading Global Markets Decoded podcast to discuss her unconventional career choices and journey to the NYSE, her experiences as a trader, and the value of networking. Lauren also provided insight into the future of trading and the rise of automation in the industry. Learn more about Simmons path to success in Lauren Simmons, the Wolfette of Wall Street Talks Trading.