The DAX 30 is a major stock market index tracking the largest German companies trading on the Frankfurt Stock Exchange and is a strong measure of German and European economic health. Keep reading to learn what the DAX 30 represents, its history, how it’s calculated, and why it’s a popular asset to trade.

The DAX 30 is an index comprising the 30 biggest companies, by market capitalization and liquidity, trading on the Frankfurt Stock Exchange (FSE). Previously known as the Deutscher Aktien Index 30 and today operating as the Deutscher Aktien Xchange 30, the DAX index began with a base value of 1,000 in 1988. Since 2006, the all-electronic Xetra system has calculated the Dax price every single second.

The DAX 30 is usually reported as a performance-based index. This means companies’ dividends, capital gains and cash disbursements are added to the net stock price, as opposed to a price index where the corporate distributions remain disregarded (this can be seen, for example, in Euro Stoxx 50). The counterparts of the Dax 30 in Europe are the CAC 40 in France and the FTSE 100 in the UK.

How is the Dax Index Calculated?

The Dax index is calculated using ‘free-float methodology’, meaning it only takes into account the number of readily-available shares and disregards the shares that cannot be bought and sold, such as those held by governments.

As with other major stock indices, the Dax 30 is weighted by market capitalization, meaning the companies higher up in the index will have a greater influence on its overall price. However, the maximum weight a listed company can be assigned is 10%.

Of the DAX 30 companies, the ten largest by market capitalization, as of October 23, 2019 are:

Other leading players featured on the index include clothing and accessories manufacturer Adidas, airline Lufthansa and residential property company Vonovia.

If a company wants to be listed on the Dax 30, it must be listed in the Prime Standard segment on the FSE, which includes companies complying with transparency standards higher than those of the alternative General Standard segment. It also has to be traded continuously in Xetra and have a free float (the portion of a company’s shares that can be publicly traded) of at least 10%.

Additionally, the company must have a registered office in Germany or the main focus of its traded volume in shares in Frankfurt, as well as a seat in the EU.

Since its foundation in July 1988, the performance of the DAX 30 has closely mirrored that of other major stock markets such as the S&P 500 in the US. In this century, this has meant reaching highs marked by the dot-com boom in 2000, lows in 2003 following the bust, and further peaks and troughs over the following years with the financial crisis of 2008 and subsequent recovery, culminating in an October 2017 peak.

The below chart shows some key landmarks in the price of the S&P 500 this century and the reasons for the swings. 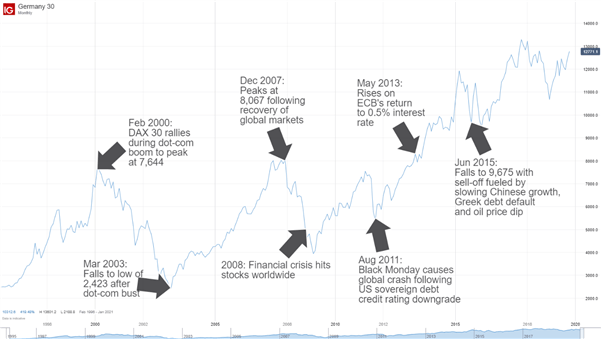 What Affects the Price of the Dax 30?

The Dax price can be affected by a number of factors, including trade wars, currency wars, the Euro exchange rate, socio-political circumstances such as Brexit and knock-on effects from other markets. Company weightings in the index can also have a profound effect on the value of the Dax index.

Advantages of Trading the Dax 30

The DAX 30 offers a high level of liquidity, long trading hours (the Frankfurt Stock Exchange trades from 9am to 5:45pm) and tight trading spreads. Many traders find the DAX to be a market with trends that are easy to spot, which explains its popularity. Also, it offers clean technical patterns across a range of timeframes, providing a good opportunity to gain or hedge exposure to equities.

The DAX 30 can be traded through DAX futures and options, and exchange-traded funds (ETFs). DailyFX also offers more technical advice on how to trade DAX 30, looking at strategies, expert tips and trading hours.

Find out more about the DAX 30

Follow the live DAX chart and read the latest news, analysis and forecasts to stay up to date with DAX 30 movements. For more in-depth price predictions, download our free quarterly equities forecast.

Trading AUD/USD: A Complete Guide to the Aussie-US Dollar Pair
AUD/USD is one of the most liquid and widely traded currency pairs. In this article, we look at basics of trading it from both the fundamental and technical analysis perspectives.

Ranking the biggest factors affecting the performance of the CAC40
Find out how economic, political and unforseen events have an impact on France's most influencial benchmark
Advertisement