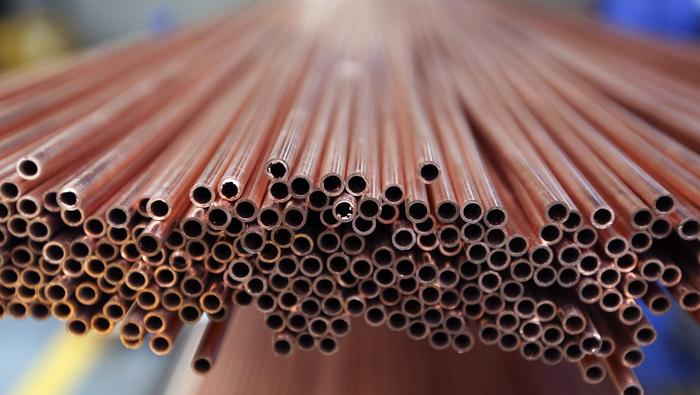 What is Copper and What is it Used For? 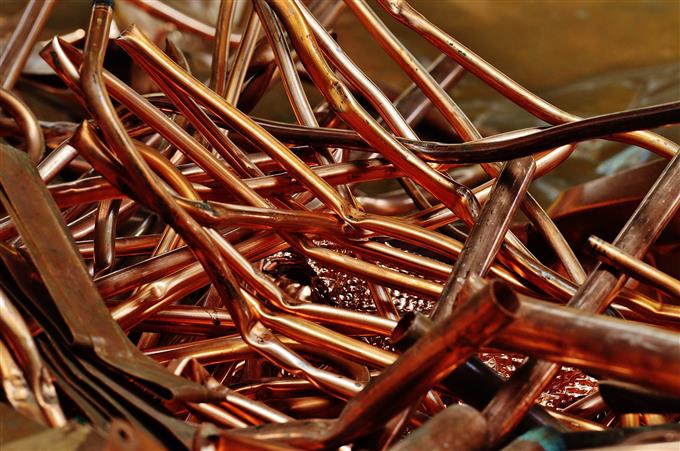 Copper is one of the most versatile and widely-used metals in the world, and a widely-traded asset in the major commodities market. In this article, discover what copper is and its history, as well as what affects copper prices and trading tips.

Copper is an abundant, reddish-brown metal that is mined for its use across a wide range of sectors, from agriculture to construction. Unlike other metals traded in the commodities market (such as gold and silver) it is not considered a monetary standard and so costs a lot less. However, some of the supply and demand forces that affect copper are the same, influencing its status as a volatile, widely-traded asset in the major commodities market.

What is copper used for?

Copper is used for a variety of applications from fertilizer to jewelry and household appliances. A strong and ductile conductor of heat and electricity, it is an important component in electrical equipment such as wiring and motors, and in construction for pipes and tubing. It is also used in alloys such as brass and bronze, where it has further applications such as zips, valves and ornaments.

The history of copper goes back some 10,000 years when, during the Bronze Age, it was the first metal ever smelted. At this point in history, when the commercial trading system was based on bartering, copper’s value was measured against that of food, wine, livestock and alternative metals.

Copper has been used alongside gold and silver to make coins since the Roman era, but copper’s low inherent value meant it was never considered a monetary standard.

Fast-forward to the 20th century and copper is being used all over the world in a wide range of sectors. As a result, the copper price has become increasingly linked to its industrial applications in the sectors mentioned above.

The 2000s commodities boom saw copper surge dramatically in price, moving from around $1/lb at the start of 2004 to $4/lb by May 2006. The below chart illustrates this, the other big price movements over the following years, and the reasons for the shifts. 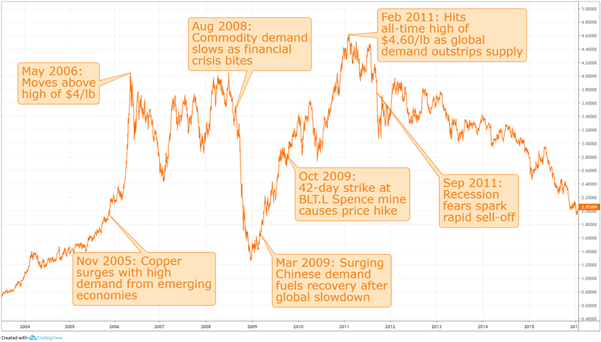 Who are the biggest copper producers?

Copper producers with the largest volume by country include Chile, Peru and China. Indeed, Chile is responsible for more than double the output of the next biggest producer, Peru, with the former producing 5.8 million metric tons in 2018 compared to Peru’s 2.4 million. The top ten producers, along with their 2018 output in metric tons are as follows:

By company, as of 2019 the largest players in the copper market are Chile’s Codelco, US-based Freeport-McMoRan and Anglo-Australian mining giant BHP Billiton.

The price of copper is influenced by a range of factors based on supply and demand considerations, as well as the outlook for alternative metals.

Prices can be impacted by geopolitical and natural events that slow down mining output, such as workers’ strikes and earthquakes.

The demand side is fueled by net importing countries, which import more copper (or other goods and services) than they export. Over the past 100 years the demand for copper has risen by almost 20 times, as developing nations use it to expand their infrastructures and boost their economies.

Additionally, the price of copper is linked to domestic housing markets, as the home-building industry uses vast amounts of the metal. This means that factors with an impact on the housing market often affect copper prices, such as non-farm payrolls, mortgage rates and GDP.

Lastly, the substitution of alternative metals can also impact the copper price. If the price of copper rises too much, buyers will seek cheaper alternatives and demand will go down. For example, in the mid-2000s, the rising price of copper led to advancements in the use of aluminum for wiring and automobile production.

How to trade copper

Copper can be traded in a range of ways, from copper futures and options in the commodities market, to exchange-traded funds (ETFs). Where permitted, spread betting and CFD trading can also be used to speculate on whether copper will go up or down in price. Read more on how to trade copper and discover the technical analysis strategies that can help you trade this commodity more consistently.

Reasons to trade copper are slightly different to those of gold and silver. While copper is popular among traders and has a variety of uses, it is abundant in supply. So, while gold and silver have inherent value, copper’s price is tied to its utility.

Copper price can be viewed as a measure of economic health, which is why copper has earned the reputation of having a metaphorical Ph.D. in economics, and the nickname “Doctor Copper”. Therefore, traders have the opportunity to take a position on copper based on their view of world growth and GDP.

But speculating on the price of copper comes with risk as well, as if the economy goes into a slowdown the market would suffer. Commodity traders also need to consider that, like all metals, copper supplies are finite – it is believed the world reserves could be depleted in the next 60-70 years.

Further reading on copper and commodities

Keep up to date with copper prices with our live chart and expert news and analysis.